We love getting your reactions to the material that we post. If your message contains new information or images, we may even publish it as a separate piece. Here’s how I came upon–and combined–what two of our readers, one a member of the LPR staff, the other a contributor working on a post for our blog, sent me in response to my “LPR Loves…Acoustic Art.”

I started my short piece on acoustic art by saying that when I sit down to write, I first turn on my computer, then turn on my music. I assumed that most creative types were similar in that respect to me and artist Jennie C. Jones, the subject of the piece. Turns out that I was wrong.

In the comments section of the posted piece, LPR Fiction Editor Jen Grow, a pleasant person who frequently has the good sense to agree with me, wrote the following paragraph (italics mine):

I never listen to music while I’m writing. However, I tend to obsess about music in a way that makes me listen to the same song or cd a million times successively. Something about the mood of the music allows me to access certain memories or emotions. That’s how I came to write a story in response to on a Patti Smith song…

That someone good writes in silence was interesting enough. But I had scheduled a piece by Lorraine Whittlesey about Smith for the middle of May, so I needed to know more.

First, I listened to Smith’s song “Don’t Say Nothing,” which Jen subsequently said had served as the inspiration for her story. It’s pretty good, so you might want to do so, too.

Then I read the story, “Fixed.” It is unpublished as yet but will be part of a collection that Jen hopes to put out next year. You can read it here right now by clicking on the link.

I might have been foolish enough to attempt to explain how the song relates to the story had Karen Garthe not saved me. Karen, you see, was slated to prepare a piece for the blog on how music drives the type of poetry that she pens. Instead, she sent me a work in progress that “demonstrates rather than analyzes” the role of music of her poetry. 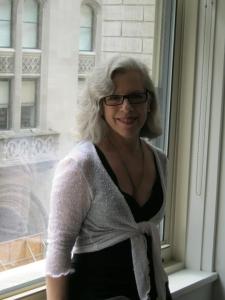 “I LOVE being surprised,” I replied. Then, to buy time while I figured out how on Earth to reproduce the poem’s complex formatting with the meager tools that this blog afforded, I sought her response to that acoustic art piece, expecting that she would describe the playlist that she used while working. Instead, she offered the following (italics mine):

…Curiously, I cannot imagine trying to write to any music but silence. The search for silence, peace and quiet…why I am practically a pilgrim of. If there is music on I will listen to it, it will take the foreground even if it is intended as background. It’s impossible for me to do anything but completely listen to music if it’s on, which is how come I’ll turn off the radio in a car if a conversation is being had, and why I become wildly distressed, even unhinged sometimes, by unwanted music/sounds, which includes (especially on the subway) other people whose earbuds are shrieking whatever awfulness. Never anything good, usually.

That said, nothing is more important to me than music and I couldn’t live without it. Music and Silence are my ideals…I’m a terrible autocrat here. It’s one or the other.

So I had another Jen on my hands. “Fine,” I said to myself. “I’ll present Smith’s song and Jen’s story while silencing my own analytic mind. And, as a matter of respect, I’ll do the same for Karen’s set. With no further comment from me.” Or some words to that effect.

So, listen to Karen’s inspiration, a section of pianist Glenn Gould’s radio documentary The Idea of North, part of his Solitude Trilogy. There’s a voice pileup at the beginning, a method that he has called “contrapuntal radio,” then Jean Sibelius’s Symphony No. 5.

And here’s “Hey Now,” Karen’s contrapuntal poem. But you’ll have to click on the link to read it as she sent it. I never managed to come up with a way to transfer the formatting.

I should end without another word. But I must add that more than poetry connects Karen to music. In the Sixties, she moved from Baltimore to New York City to attend the American Ballet Theater school and later studied with Merce Cunningham. And in the Seventies, she worked for The Wartoke Concern, managing Patti Smith, among others.

One thought on “Reader Response: Written in Silence, Inspired by Sound”