A journal such as ours requires a vibrant literary and artistic environment to thrive—and even survive. In appreciation of the various cultural entities around us, we present “Meet the Neighbors,” a series where we provide you with personal introductions to a diverse assortment.

The Maryland-D.C. area is rich with writing resources. Though I’ve grown up in this area, I didn’t discover 99% of them until recently. Some of this is due to my own short-sight, but the other reason is because many of them are just rising up. One of the most exciting resources to pop up in recent years is Litmore, a Baltimore-based writing center run by Barbara Morisson and Julie Fisher.

I first heard about Litmore through Barbara, as we were both attending the Maryland Writers Association conference. I didn’t know her very well at the time, but asked her if Litmore was looking for instructors and she encouraged me to apply. This was right when Litmore was starting out, and I felt honored  to be part of this venture. Having taught at the University of Maryland, I was excited to diversify my teaching experience and get to lead workshops that focused on the content I was most excited about.

Since then, Litmore has diversified its workshop list, taken on open mike series, and has moved into the heart of Baltimore, sharing space with a beautiful art studio. And let me clarify that this hasn’t been over a span of five, ten years. It’s been not even a year! Barbara does a wonderful job with Litmore—she has a heart for the written word and the writing community. Beyond Litmore, she’s an active member of the Maryland Writer’s Association, and has several successful books of her own.

Many things make Litmore stick out from the other writing centers in the area. First off is its atmosphere. The first Litmore location was a house just north of Baltimore, and I loved the idea of that: inhabiting a house with writing. It was quiet and peaceful, and it’s no wonder Litmore hosted weekly write-ins there. If I lived closer to Baltimore, I would’ve come to those write-ins, hands down! Even the new location in the middle of the city maintains this welcome spirit. This isn’t just because of the coffee and tea set out for guests, the flyers for local literary magazines and events, or even the new poetry library. It’s the events Barbara and Julie host.

Besides workshops, Litmore hosts writing retreats, “writing hours” (which are an opportunity to write as well as network with fellow Baltimore writers), open mikes and reading series, book clubs, book releases, and more. These events revolve not just around the craft but also in developing a community of writers. While I’ve been to other writer’s centers where I’m not sure where I should be or who to talk to, Litmore makes me feel at home. Click here to see the upcoming events at Litmore. 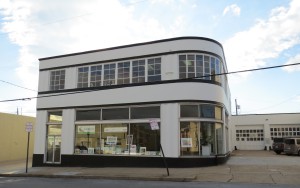 Litmore’s welcoming community is reinforced through their workshops. These workshops are intimate, practical, unpretentious, and reasonably priced. Workshops cover topics including: marketing, publishing, memoirs, workshops for children, and even workshops where editors give feedback on novel excerpts. While many writing centers focus almost exclusively on craft, Litmore hosts a successful balance of focus on both craft and professional development. Their prices are quite low, making them accessible to everyone. They also give discounts for Litmore members.

We need more places like Litmore: safe houses for writing and writers alike. If you haven’t been, take a look at their site and see if any upcoming workshops strike your fancy. You won’t be disappointed.

Online Editor’s Note: Litmore plays host this coming Sat., Feb. 21, to “Get Started on Your Marketing Plan” from 1-4 pm (tickets required) and “Writers’ Alchemy Release” at 6 pm (Cost: $15, which includes a free book). Sun., Feb. 22 you can see LPR Contributor Fred Foote’s multi-media performance based upon his award-winning book, “Medic Against Bomb: A Doctor’s Poetry Against War.”

4 thoughts on “Meet the Neighbors: Litmore”