When Shaileen Beyer of the Enoch Pratt Free Library contacted Little Patuxent Review to inquire if we’d be interested in partnering on a statewide poetry contest for a fourth year, we jumped at the opportunity.

By the time the contest concluded on March 1, 300 entries from 93 cities and towns, representing 22 counties plus Baltimore City, were submitted in the blind contest. Little Patuxent Review editor Steven Leyva and LPR poetry editor Evan Lasavoy judged the poems. Although they chose three finalists, all of whom appeared in our Summer 2016 issue, “Charlotte Darling” by Saundra Rose Maley was the winning poem. 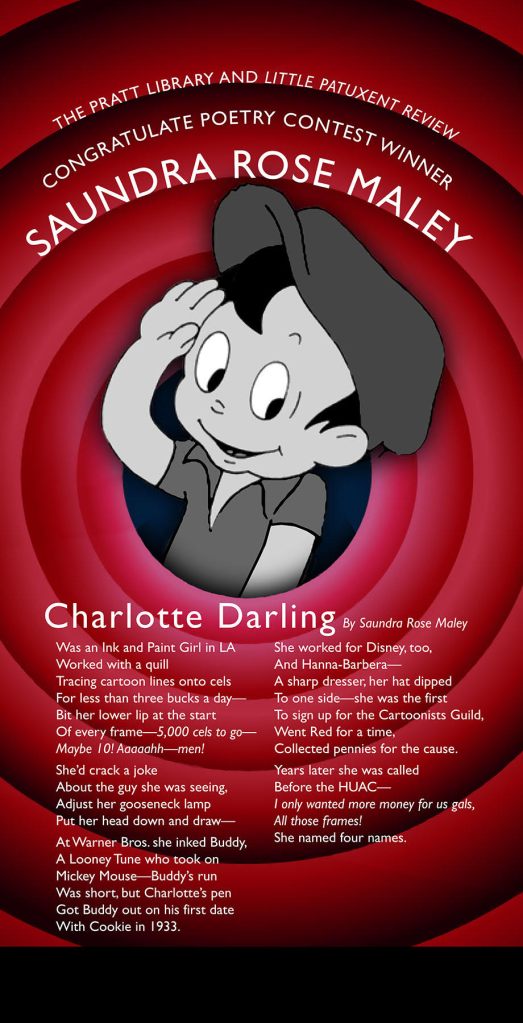 Contest winner Saundra Rose Maley has had poems in Dryad, Beltway Poetry Quarterly, Full Moon on K Street: Poems about Washington D.C., and D.C. Perspectives. Her first book of poems, Disappearing Act, was published in 2015, by Dryad Press. She co-edited A Wild Perfection: The Selected Letters of James Wright with Anne Wright and is currently working again with Anne on a book about Wright and translation, tentatively titled Where the Treasure Lies. She also published Solitary Apprenticeship: James Wright and German Poetry. She teaches Composition and Research at Montgomery College in Takoma Park, Maryland.

Join poets Le Hinton and Laura Shovan on Wednesday, July 20, from 6:30-8 pm at the Central Branch of the Enoch Pratt Free Library as they read in the company of the 2016 Pratt Library Poetry Contest winner and finalists—Saundra Rose Maley, Maggie Rosen, and Sheri Allen. The host is Steven Leyva, editor of Little Patuxent Review, which is celebrating its 10-year anniversary.