This essay was originally published on May 13, 2014. It is being re-shared in support of LPR’s 10th Anniversary celebration. 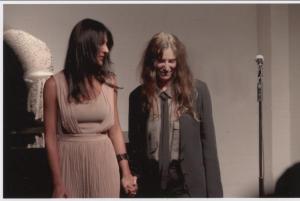 Jesse Paris Smith and Patti Smith at The Noguchi Museum (Photo: Patrick McMullan Company, 2012)The subject of intergenerational performers has been dear to my heart since I learned that my maternal grandmother’s family had broadcast a live AM radio show on Saturday nights from New York City in the Thirties and Forties. I was inspired to explore the topic further while attending Patti Smith concerts in NYC and Baltimore, where her son Jackson and her daughter Jesse joined her onstage. Since I am a musician and the theme of the upcoming LPR issue is music, I wanted to share what I learned. To get it right, I enlisted the help of Jesse Paris Smith, Patti Smith’s daughter.

Jesse describes her mother as “a true Renaissance woman,” which is evident from any bio. Known as “the Godmother of Punk,” Patti is a singer-songwriter, a poet and a visual artist. In 2005, she was named a Commander of the Ordre des Arts et des Lettres. In 2007, she was inducted into the Rock and Roll Hall of Fame. In 2010, she received the National Book Award for her memoir Just Kids and an ASCAP Foundation Lifetime Achievement Award. In 2011, she won a Polar Music Prize. And it won’t end there.

Jesse, whose guitarist father is the late Fred “Sonic” Smith, notes reverberations of Patti’s polymath persona in herself.

NOTE: If you enjoyed this essay, please check out LPR’s Issue 14: Music.  https://littlepatuxentreview.org/issues/14-summer-2013/