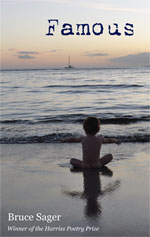 “Driving underwater…describes writing poetry to a T,” says Bruce Sager, and, indeed, that phrase almost became the title of Famous, a witty, engaging and rewarding poetry collection. A cruise through the deep with Sager brings delights and surprises of the sort that such a journey promises.

Turn, for example, to “X Marks the Spot,” one of several meditations on the small units that are the building blocks of language:

X permits the unlettered to tell us
who they were, or are, to sign
their lives away, to convey what they have
of the riches of this world; yet
will alternate with O in tendering
affection epistolary, e- or snail.

Or this, from “Morphemes”:

Here the place where

musing & music & lingo collide, give up
the ghost, surrender the Me—just fish
in a school of fish.

Or consider “Abecedarian Concerns,” which cannot easily be excerpted (so get the book and read it!), a poem that takes variations on an a-b-c-d rhyme scheme across three numbered stanzas, using the same rhyming words in each, then constructs a fourth stanza of only the rhyming words and makes it meaningful and satisfyingly conclusive.

Indeed, language in general is of concern to Sager, as demonstrated by such poems as “The Eskimo Dictionary”:

There sixty words
for fish,
fifty-five
for frozen,
but fax, syndrome and
return on investment
are nowhere
to be found.

Some of us, though, must take the oar
of reason in one hand and the oar
of allocution in the other
to pull hard against
the risen waves of fear.

(See how “reason” plays against “risen,” a small example of Sager’s deftness in handling of language.)

Or “Jackboot,” in which a daughter’s innocent request for a definition for her homework sets the poet on a consideration of the word and its baleful presence in history:

Well, I say out loud, I believe the jackboot
to be a figure of speech, unless it happens
to be an actual jackboot.

This is another case where an excerpt can hardly do justice to the poem. Aside from Sager’s characteristic felicity of expression, this particular poem also exemplifies the tenderness that subtly tinges Sager’s work elsewhere.

The tenderness is appealing because it is subtle and succeeds admirably in avoiding sentimentality; in addition, Sager maintains his high level of linguistic skill regardless of the emotions involved. Take the title poem (which the cover photo beautifully illustrates), a celebration of a child’s joy on the beach and a mother’s momentary alarm over losing sight of her son turned to quiet rejoicing upon locating him:

…here is joy, for here
is the little guy standing atop
the light dune of memory
looking down at the woman
rejoicing in the sight of him
now, no longer alarmed
but yet repining, the woman
who has just made his name
bong like a bell through the dunes.

I’d like to quote generously from many of these pieces: the witty yet chilling “Hitler’s Analyst,” the equally witty and moving “Kafka pays a visit” or–especially–the wonderful “Driving Underwater”:

Though you must sacrifice the wind in your hair,
it’s really kind of fun, this sort of driving,
once you get the hang of staying in your lane
without the guidance of road stripes…

Famous is a splendid introduction to the work of this remarkable Maryland poet. It was chosen by no less than Connecticut Poet Laureate Dick Allen to receive the 2011 Harriss Poetry Prize, unsurprising in that Allen is likewise known for his humor, wit and linguistic dazzle and surely recognized in Sager a kindred spirit. 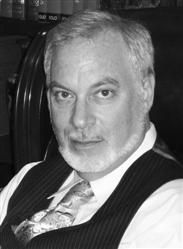 Bruce Sager serves as a corporate officer in a systems integration firm. In addition to the Harriss Prize, he received Maryland State Arts Council Individual Artist Awards in both fiction (2008) and poetry (2011), a Baltimore City Arts grant in poetry (1987) and the 1986 Artscape Literary Arts Award in poetry, judged by William Stafford. Prior chapbooks include Nine Ninety-Five (1971) and The Pumping Station (1986).

The Summer 2011 Make Believe issue of Little Patuxent Review contains both prose and poetry pieces by Sager. The LPR Winter 2011 Water issue presents a poem by Greg Luce. Click on Table of Contents links to view videos of their readings. Luce also contributed an essay on that poem to our “Concerning Craft” series.