Audacity defines the best and worst within us. It is boldness or daring, accompanied by confident or arrogant disregard for personal safety, conventional thought or other restrictions. It is also effrontery, insolence or shamelessness. The “Audacious Ideas” essay series celebrates this theme, which serves as the basis of our Summer 2012 print issue. 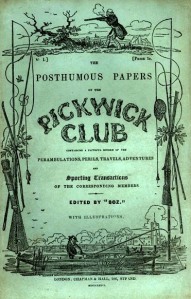 The original cover of Charles Dickens’ The Posthumous Papers of the Pickwick Club, 1836

In 1878, Scribner’s Monthly claimed that it is only the “second and third rate novelist who could not get published in a magazine and is obliged to publish in a volume, and it is in a magazine that the best novelists always appear first.” If that sounds outlandish these days, author Rafael Alvarez, who once served as an LPR fiction editor but is better known as a screenwriter for the acclaimed HBO series Homicide: Life on the Street and The Wire, has the audacity to envision a not too distant future where that might ring true again.

Since the surge of serialized literature in the Victorian Era that supported this claim seems to have been spurred by technological advances in printing and improved economics of distribution and similar factors are in play with the increasing role of the Internet and devices like Kindle and the iPad in reading, conditions are favorable for a renaissance of serialization. All we lack is a modern-day Dickens, whose phenomenally successful sequence of loosely related stories, The Posthumous Papers of the Pickwick Club, enticed the public to embrace the format. Perhaps Rafael, the penultimate storyteller of our time, will assume that role with the publication of The Long Vietnam of My Soul in the NorthBaltimorePatch.

Unlike the smattering of other digital-age authors who have given it a go–Stephen King with the The Plant,  Michel Faber with The Crimson Petal and the White, Orson Scott Card with Hot Sleep and InterGalactic Medicine Show, Tracy and Laura Hickman with Dragon’s Bard and Lawrence Watt-Evans with his Ethshar series–Rafael positioned his serialized novel in Patch Media, which exemplifies “curated citizen journalism” or “hyperlocal journalism.” In doing so, he took his place amid everyday people who had something to say and, thereby, opened up access to quality literature for entire new classes of readers, just as Dickens did in his day.

Since I’m one of those who has been giving away her print library and gone entirely digital for new acquisitions, I was delighted when Rafael allowed me to introduce his online heroine Nieves to you and offered to provide a bit of background on how it all came about. Here’s some of what he had to say: 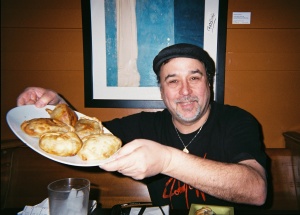 Rafael Alvarez, offering readers tasty tidbits: empanadas, which trace their origins to Galacia, an ancestral home of the author and his heroine Nieves. (Photo: Billy Driscoll)

Nieves is not Nell Trent, not by a long shot. A heroin addict from my grandfather’s region of Spain, a village outside the port of Vigo in Galicia, Nieves alights in Baltimore during the summer of 1988 in flight from the sources of her destruction. Like so many of us, she does not realize that she has brought the problem with her as surely as she has landed in the New World in boots of Spanish leather.

In this bicentennial of the birth of Charles Dickens, whose David Copperfield taught me the fundamentals of crumbs-in-the-forest storytelling when I worked as an ordinary seaman after high school, I am publishing a serialized novel on the Internet. Though the characters were established some 20 years ago in The Fountain of Highlandtown, even I am not sure where the tale is headed from week to week. And that’s the joy of it.

Just before Catholic Easter, I walked through the Hebrew Friendship Cemetery in the 3600 block of East Baltimore Street with the poet Tony Hayes. I glimpsed, for the first time, tombstones in the shape of tree trunks and the place where the names Harry & Jeanette Weinberg may have the most meaning: their graves. And somehow it occurred to me that this old burying ground, purchased in 1849 and extending from Baltimore Street to Pulaski Highway, would be the spot where Nieves shoots dope for the last time before leaving for Crabtown for good.

My publisher is the NorthBaltimorePatch, an AOL company, and the opportunity was realized through the literary sensibility and sympathies of former Baltimore Sun City Hall correspondent Doug Donovan, now a Maryland editor for Patch. Donovan puts up the story with a provocative photo–a bottle of Fundador brandy, a rosebush next to a trash can, Grandpop’s cuff links–and I blast the link to the new chapter through Facebook to the 2,000 or so people who call me “friend.” AOL tabulates the hits the chapters get. Though the novel has hardly gone viral, so far so good.

I file a chapter or two a month, pushing the story forward by increments sometimes too meager to be detected. The story begins on Memorial Day, and by Part 12, where the story stands today, it is still June. Sometimes I go back in time and, like a mason slipping thin, smooth stones between rows of brick, fill holes between chapters already published. Sometimes I jump ahead, hinting at events for which there is no probability on the established record. Eventually, news of Nieves’ uncertain fate will reach a highly distracted reading public in cyberspace.

In 1841, three years before the invention of the telephone, word of Little Nell’s destiny was delivered to America by ships landing from Britain. The faithful waited on the docks of New York City for the outcome, shedding tears and cursing Dickens when they learned that Nell Trent had succumbed to her many and arduous journeys. “She was dead,” wrote Dickens. “Dear, gentle, patient, noble Nell was dead.”

Wither Nieves? Will the seductive Spaniard survive–not just her addictions but herself? Will Basilio survive Nieves? Go down to the docks along Pratt Street when the ship arrives and find out.

One day, Rafael’s entire tale will be pressed between hard covers and given away out of the back of his truck as he drives between Baltimore and Los Angeles. If you haven’t already come across the online version in your wanderings, here’s an excerpt from Part 8:

Call it sex, call it sick, call it sleep—call it anything but love when Nieves and Basilio finally lay together for the first and last time, rolling beneath the hole in the rafters he’d made to paint by moonlight. The marks left–lines on Basilio’s face and hands, lines on the left and right–were indelible. It was over by Labor Day and never ended.

If you still entertain doubts about this format’s validity, consider some of the other works that were originally serialized. There was One Thousand and One Nights way back when and Harriet Beecher Stowe’s Uncle Tom’s Cabin, Gustave Flaubert’s Madame Bovary, Leo Tolstoy’s Anna Karenina and Fyodor Dostoevsky’s The Brothers Karamazov in the Nineteenth Century. And more recently but still not electronically, Tom Wolfe’s The Bonfire of the Vanities and Michael Chabon’s Gentlemen of the Road.

Note: If you’re discarding part of your print library, do what I did: give it to Rafael. He makes donated books available to his Highlandtown neighbors and visitors. And while you’re there, take advantage of the Greektown Reading Series he recently started. This month’s will be held at 7:00 pm on Thursday, April 26 at the Habanero Grill. There will be free Greek appetizers and accordion music as well as presenters Ann LoLord0, Christopher Corbett, Michael Hill and Gail Rosen.