We keep coming across amazing material that doesn’t fit neatly into any of the pieces that we’re preparing. So we started the “LPR Loves…” series, where we simply share it with you without too much additional comment. 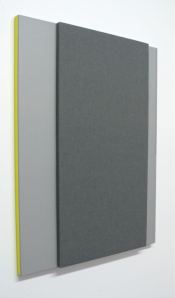 When I sit down to write, I turn on my computer. Then turn on my music. And don’t give the latter much more thought than the former. Jennie C. Jones, a Brooklyn-based visual artist, also had a soundtrack for her work. Only one day she started to give it some serious thought.

The result was worthy of a $50,000 Wein Prize, awarded annually by the Studio Museum in Harlem to an African-American artist and started by George Wein, a promoter who founded the Newport Jazz Festival, in honor of his late wife, a longtime trustee of the museum.

Jones creates visual and acoustic abstractions that explore the histories of music and sound. Calling her approach “listening as a conceptual practice,” she is influenced by the Fifties and Sixties, drawing upon experimental jazz and minimalist art and embracing improvisation, found objects and the material culture of music.

Here’s Jones in her own words and images:

How does your playlist influence your creative work? Leave a reply to let us know.