In preparation of our Food issue (submissions open until November 1, after which they’ll simmer ’til winter), I’ve asked members of the LPR community to share stories of what they eat. Food occupies such a central place in our lives, that we can’t help but grow with it. Whether we were setting off smoke alarms in a zealous attempt to impress or, as in the case of this entry from Clarinda Harriss, learning life lessons from Julia Child, we can call on the sounds, smells, and tastes of our most formative and transformative foods to walk back into our own narrative histories. And on Laura’s suggestion, each piece in this series will feature a recipe, so you can cook yourself through an experience yourself. If you have a transformative experience with food, leave a comment and I’ll be in touch.

And now that I’ve laid the table, Clarinda Harriss: 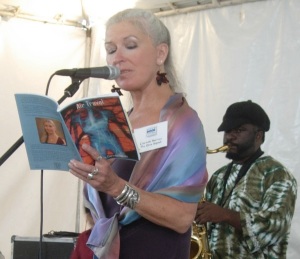 For an early-1960s Christmas, my then-husband’s sister, a fabulous cook, gave me a copy of Julia Child’s Mastering the Art of French Cooking. Betty had a satirical bent, and I thought the present might have been offered in that spirit. The kitchen in our 2-room Charles Village grad student apartment clwas a 6 x 6 space that housed, in addition to the entire upper floors’ huge hot water heater, a dorm-size refrigerator whose tiny top was also the only “counter space,” a miniature sink, and a toy-size stove.

One day I returned home from a late-afternoon class needing to put together some dinner for my husband to gulp down before heading out to night law-school and found that the larder was completely bare except for a pitcher of half-and-a half, a stick of butter, a couple of eggs, a slim wedge of cheese, and two strips of bacon. A desperate search revealed nothing in the pantry (read “linen closet”) but half a small bag of flour, shoved into a mason jar to discourage the roaches.

I can’t imagine what impulse, what good genie, what goddess, what on earth made me turn to Julia. But there, near the front of her tome, it was revealed unto me that I had all I needed to make a quiche. Bear in mind that this occurred long before Real Men and their position vis a vis quiches became a popular issue. So I did what Julia said to do on pages 140 and 147: I made a quiche. And lo, it was good.

The following Thanksgiving I heeded the indomitable spirit of that great cook: think of Meryl Streep as Julia Child warbling “I was FEARLESS.” We hosted sister-in-law Betty, her husband, and her many children at the tiny apartment for a full-scale traditional Thanksgiving dinner. Yes, Virginia – and Betty, and everybody – you can cook a 25-lb turkey in an oven that looks smaller than the turkey itself.

And yes, Betty, I suddenly understood your gift. It was the gift of a food-loving, cookery-loving, risk-taking cry: “Have No Fear.”

And I’m not just talking about food.

What I do now, quick-quiche-wise:  Line a pie pan with a Pillsbury (NOT store brand) pre-made pie crust and prick it lightly all over; bake at 350 for about 7 minutes.  Beat together 2 or 3 eggs, a cup of heavy cream, a big handful of shredded cheddar or whatever cheese you fancy, and a dash of salt. Scatter a few strips of cooked bacon, crumbled, over the baked crust.  Pour in the egg-cream mixture.  Dab bits of butter (about a tbsp total) over the top. Bake for about 40 minutes.  Serve with a green salad to ease your guilt.

Clarinda Harriss is a professor emerita of English from Towson University and 40-year director of BrickHouse Books, Inc., Maryland’s oldest literary press. Her most recently published poetry collections are Air Travel, Dirty Blue Voice, and Mortmain. Several years ago, CityLit initiated the annual Harriss Award for Poetry in her honor. With poet Moira Egan, she edited Hot Sonnets: An Anthology. A collection of Harriss’ award-winning short stories, The White Rail, was released this year. One of her main interests continues to be prison writers and restorative justice projects.

6 thoughts on “What You Eat: Fearless Quiche”