This is the story of many of our meals. We pace aisles, snag this and that from shelves, hand some cash to the cashier, and make our way back home to roast, fry, braise, or microwave. But even a home-cooked meal is far from homegrown, and the modern agriculture industry in Western capitalist society has distanced us from the origins of the food that keeps us alive.

While walking alongside the Brooklyn Bridge, I came across several shopping carts repurposed. The carts carried a bounty of potted plants. In place of prices, ingredients blooming out of the carts were tagged with growing times. I stopped to snap a few photos, noted the name of the project, and went home to research further.

Á la Cart, a participatory workshop and installation, was a project of Kristyna and Marek Milde, two Brooklyn-based artists raised on the uniform food of communist rule in Czechoslovakia. “It always appeared to us that in the West there was a universe of choices; however, here the unification and monopolization is clearly happening too—for different reasons but with similar results,” Kristyna noted. For the Mildes, food is an inherently political vector, representing both “the powerful weapon or tool of self-reliance” and the act of eating as “agree[ing] to [the] highest degree [by] making the subject part of our body.”

To the Mildes, this political significance amplifies the already intense emotional role food plays in our lives. Created as part of Smack Mellon’s exhibition FOODshed: Art and Agriculture in Action, the project was focused on community and human interaction from the outset:

We have started by inviting members of the local community in DUMBO Brooklyn, inexperienced in gardening, to actively engage in the process of growing ingredients for a single dish of their choice. Each participant adopted one supermarket shopping cart filled with soil that served as [a] garden bed, and attempted to cultivate ingredients for his/her favorite recipe. The development of the project was documented and the participants were asked to take notes about the experience. . . . The project took place in the growing season of 2014 starting in May and was finished in late September with a public event presented at the Dumbo Street Festival that featured the harvest and a gathering of the participants, who met to eat and to share their experience and ideas about the urban gardening and sustainable food production. The idea of Á la Cart is to serve both as a living sculpture and a platform for growing food. It is not meant to be a farm or a professional gardening course but rather a playground encouraging new experiences while reconsidering the limits of consumerism.

Challenging participants to truly bring up their food from the soil, there were some surprises on the way to the table the Mildes laid in September. In the four months of growth, one cart of eggplants never got larger than the size of pickling cucumbers, and another grower found that they could not produce enough strawberries to sufficiently flavor their ice cream. But far from failures, Kristyna shared that “having eggplant since [the street festival] is different, and part of the meal is appreciation of the farmer who patiently took care of this plant for such a long time.” And despite the fact that the Mildes call their own backyard garden a “rather symbolic operation,” they produced a delicious caprese salad and a refreshing mint lemonade. What’s the difference that made their tomatoes so much more appetizing? Kristyna says,

The tomato of today is not the tomato of yesterday; it is a completely different product, a different species with different chemical content rooted rather in the drug and oil industry anchored by the patent office than in the soil and trellis. The change is not limited to tomatoes; it extends to the whole commercial food production controlled today by few companies. Therefore we think that it is time that we reconsider the passive position of the consumer and claim back the power connected with producing food, in the sense that we support active engagement and awareness for the ways and methods food is grown and processed. 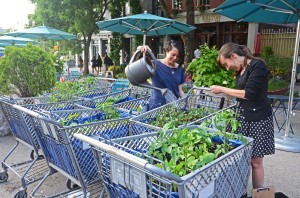 As someone used to strange looks from roommates about pickles bubbling on the countertop or about the pot of yogurt in the oven, I can certainly get behind advocating for a deeper level of involvement with food. In our current culture, foods that have been everyday staples across the world for millennia are now largely believed to be impossible to cook in one’s own home without the wizardry of a high-tech gadget. Gadgets may be how industry gets it done, but as a culture we can choose to cultivate a deeper relationship with our food rather than have it dictated to us by corporate or political interests. Artists like Kristyna and Marek Milde can help lead the way.

You can read my full interview with them about Á la Cart and other projects here. The interview further explores their experiences in communist Czechoslovakia, the aesthetics of Á la Cart, and the dangers that the artisanal food movement faces from marketers seeking the next trend.