Every once in a while, we learn of something extraordinary right in our backyard. Such is the case with Goucher College’s collection of Jane Austen’s original materials. LPR Contributor Kris Faatz visited with Dr. Juliette Wells in April 2015 to talk about this superb find.

Jane Austen, born in 1775, lived only 41 years. Her parents raised their children to be literate and creative, sending both their daughters, for a time, to boarding school. Austen published anonymously and three of her novels received critical acclaim immediately. Her brother Henry disclosed her identity after she died in 1817, and Austen’s popularity began to soar. 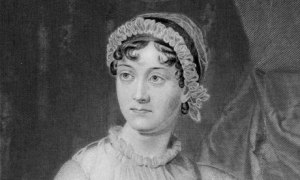 Jane Austen always knew what she wanted. She grew up in an era when young women learned how to paint, dance, write and play music mostly to use those skills as bargaining chips in husband-hunting. Unlike many of her peers, Austen committed herself to serious artistic work at an early age. She wanted to be a writer, and she was lucky enough to have the support of her family: her father’s work as a clergyman meant that young Jane had access to books, and her brothers were able to support her financially as she steered clear of a woman’s usual role as wife and mother. All her life, she stayed close to home and looked out at a small slice of the world, but her keen observation and sense of humor helped her to draw portraits of people and places that still touch readers two centuries after her death.

Towson’s Goucher College celebrates Austen’s life and work with an extraordinary collection of source materials, early published editions and translations. The College Library’s special collections offer a feast for Austen fans, scholars and new initiates alike. Dr. Juliette Wells, Chair of Goucher’s English Department, specializes in Austen and recently sat down with the Little Patuxent Review’s contributor to talk about the collection and her own research into Austen’s life and writing.

Dr. Wells didn’t plan to become an Austen specialist. She did her undergraduate work at Johns Hopkins and Peabody, receiving dual Bachelor’s degrees in English and music. At Yale, where she did her doctoral studies, she focused on eighteenth and nineteenth century women’s literature. Her work in music gave her an interest in how women writers portrayed feminine artistic accomplishment in their books. She looked at female characters drawn by Austen, Charlotte Brontë and George Eliot, and also looked at the influence the arts had in the lives of all three of those writers. All of them were artistically talented in other areas; Austen and Eliot as musicians, Brontë as a painter (Brontë in fact wanted to be a professional painter, but only her brother received formal training). Dr. Wells became interested particularly in what Austen’s work said about education for middle- and upper-class women. Women’s education during that period had controversial undertones; it wasn’t considered entirely appropriate, except as a way to impress men.

When Dr. Wells began teaching, one of her first classes was a seminar on Austen in popular culture. She found that her students connected especially with film adaptations of Austen, and she was interested in how feminine accomplishment translated onto the screen. Women worked hard to develop their artistic talents. The smooth veneer of a polite upper-class life hid an intense element of tension and competition that audiences understood. Dr. Wells saw her students engaging with the films and with modern interpretations of Austen and saw the excitement and sense of connection Austen’s work inspired. She decided to dig more deeply and find out what about Austen’s work makes it so compelling to readers today.

She became involved with the Jane Austen Society of North America (JASNA), a group for scholars and enthusiasts alike, and received a fellowship for a month-long visit to the Jane Austen House in Chawton, England. Now a museum, the Austen House was Austen’s residence from 1809 until her death in 1817. The security and stability of her life during that time gave her the freedom to write prolifically. Dr. Wells interviewed visitors to the Austen House to find out why they had come to see it. Some were casual tourists, but many were enthusiastic Austen readers. Visitors of all ages, from all over the world, told Dr. Wells how much Austen had inspired them: “Jane Austen is my hero.”

Dr. Wells also received a fellowship from Goucher and spent 2009-2010 as the college’s Austen scholar-in-residence. She researched the college’s Austen collection and the story of the woman who had compiled it, Alberta Hirscheimer Burke, who attended Goucher as a student from 1924-1928. Burke and her husband Henry visited London in 1930, shortly after the first Austen bibliography was published, and visited Charing Cross bookstores to start collecting first editions. From 1930 until her death in 1975, Alberta collected not only early printings of Austen’s books, but also personal Austen correspondence, her own correspondence with book dealers, and translations of the books. The translations in particular set Burke’s collection apart from others; no one else had started gathering those. Burke also developed her own particular interest: immersing herself in Austen’s world. She researched and collected period magazines and books that featured hand-colored illustrations of private homes and the clothing of the period. Those original materials are still available in Goucher’s Austen collection. Students and enthusiasts can explore them and get an insider view of Austen’s life and times.

It’s clear that Alberta always planned to build an enduring Austen collection, because as early as 1935 she wrote to Goucher and offered the college her materials in the event of her death. In spite of that, she never reached out to scholars or wanted to be recognized as one herself. She was very private and kept her research to herself, creating her own field of study and becoming an expert in it. She knew that scholars in her time wouldn’t be interested in the broader historical perspective on Austen’s life. Scholarship has only started to move in that direction recently. She never had formal training in putting a collection together or cataloguing it, but Goucher’s collection is now recognized as one of the finest Austen resources available. The private Austen correspondence that Alberta collected is now part of the Pierpont Morgan collection in New York, and is considered the best private collection outside the Austen family.

Visitors are encouraged to come and explore Goucher’s Austen collection for themselves. The library welcomes specialists, fans, students and new Austen readers alike. In August 2015 the library will run a special exhibit of the Alberta Burke collection, which will be open to the public through the 2015-2016 academic year. To learn more about the exhibit and other public events, or to learn about scheduling an appointment to visit the collection, visit www.goucher.edu/specialcollections.