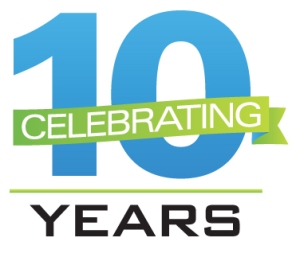 Ten. Do you remember hitting that double-digit birthday? Or the first time you counted to ten? You felt like a big kid.

Then there were David Letterman’s famous “Top Ten Lists.”  (I’m still mourning their demise.) On the eve of the millennium, the hit film “10 Things I Hate About You” opened in theaters. Bo Derek loped across the screen, a perfect “10” in Dudley Moore’s — and every red-blooded male’s —fantasy.

Why am I fixated on the number ten? Because ten years ago, a group of literary-minded, forward-thinking folks gathered in Columbia, MD, and decided to resurrect a defunct journal called Little Patuxent Review.

Here’s an excerpt from our “About” page:

LPR was named for Little Patuxent River, one of the three major tributaries of the Patuxent River. Like LPR, the river flows over stones — the Algonquin word “Patuxent” means “water flowing over smooth stones” — through Howard County, Maryland, gathering strength as it carries content to the Chesapeake Bay and out toward the larger world.

LPR was founded in 2006 by a group of local writers — Mike Clark, Ann Bracken, Ann Barney, Brendan Donegan — to fill the void left when a periodical of the same title, founded by poets Ralph and Margot Treital, closed a quarter century ago.

They envisioned LPR as a forum for area writers and artists. In doing so, LPR not only provides readers with a diverse array of local offerings but also attracts contributors of national repute.

LPR has featured poetry from Donald Hall, Poet Laureate of the United States and Michael Glaser, Poet Laureate of Maryland. In addition, from Delmore Schwartz Memorial Award winner Stanley Plumly, the late Lucille Clifton, winner of the 2000 National Book Award for Poetry and recipient of the Robert Frost Medal for Lifetime Achievement from the Poetry Society of America and Joy Harjo, recipient of the Lifetime Achievement Award from the Native Writers’ Circle of the Americas.

There has been fiction from Edith Pearlman, whose collection Binocular Vision: New and Selected Stories won the 2011 National Book Critics Circle Award,  Michael Chabon, whose Amazing Adventures of Kavalier & Clay won the 2001 Pulitzer Prize for Fiction, Rafael Alvarez, whose screenwriting contributed to the critically acclaimed television series Homicide: Life in the Streets and The Wire, and Manil Suri, whose The Death of Vishnu became an international bestseller.

There have been myriad early efforts from writers and artists who will look back on Little Patuxent Review as the publication that gave them their start.

As we celebrate our ten-year anniversary, we’ll be showcasing previous issues, highlighting cover art, and inviting you to engage with us in new ways. Thanks for your support!