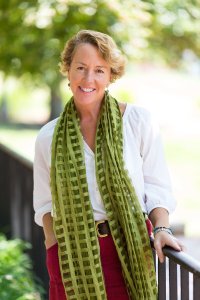 Wendy Mitman Clarke’s poetry has been published in Rattle, Delmarva Review, and Blue River Review, and it will appear in the spring 2018 issue of Blackbird. She won the Pat Nielsen Poetry Prize in 2015 and 2017, and her poem “The Kiss” was a Pushcart Prize nominee. Her nonfiction has been published in River Teeth, Smithsonian, Preservation, and National Parks. Her novel Still Water Bending was released in October 2017. You can read and view her work at www.wendymitmanclarke.com.

Q: What’s the name of the form you use in “Beachcombing.” Why did you make that choice?

A: This form is a pantoum. I was really intimidated by form at first, but I learn so much from it. I’m intrigued by the paradoxical way it makes you more flexible, stretches your thinking and your effort, and often takes the poem to a place you didn’t expect or perhaps wouldn’t have gone at first. In this case, the repetition that this form required worked to establish the kind of rhythmic movement of waves upon a shoreline, and so the form complemented the poem’s setting and topic perfectly. I also think it’s fantastic that a form as ancient as the pantoum can so beautifully illuminate a subject that’s so vital in our contemporary world.

Q: Your poem begins with a statement from UNESCO about plastic killing marine animals. What’s the relationship in your writing between literature and social/environmental causes?

A: So many things are happening in our world today that demand that we bear witness and raise our voices, it can be overwhelming. I felt the need to prioritize. I have spent my whole life on the water, have sailed tens of thousands of miles and have been in some really remote places. Everywhere I have found plastic. My daughter and I are avid beachcombers, and yet with every perfect shell comes a disposable razor or a toothbrush or a tampon applicator or a little round ball from a deodorant dispenser or a mylar balloon, or just tiny, colorful, indiscriminate bits of plastic. It doesn’t biodegrade, and fish and birds and whales—anything that lives in or near the ocean—ingest it in some form. Without our oceans, we as a species and as a planet are dead. People don’t understand that with every choice they make for their convenience, they are killing the oceans and the animals that depend upon them—ourselves included. Plastic straws, plastic coffee cup lids, plastic water bottles—it’s ubiquitous and pervasive and it has to stop. I hope if I focus my writing on trying to make people more aware of issues like this, perhaps I can do my small part to help our natural world and the animals and organisms with whom we share it. The Lorax had it right: Someone has to speak for the trees. Also, artists like Chris Jordan—whose work “Midway: Message From the Gyre” absolutely shatters me—inspire me to raise my voice through my writing.

Q: You seem to write everything—poetry, nonfiction, fiction. What got you into writing?

I have been writing since I can remember. I come from a family of voracious readers, and writing was always valued in my family. My dad could recite things like “The Rime of the Ancient Mariner” by heart, and at every Christmas or major family event like a wedding, he would write a poem to commemorate it. I had an amazing English teacher in high school—that one teacher you worship and for whom you want to excel, and after a I wrote a short story about a post-apocalyptic world, he encouraged me to pursue more creative writing. My nonfiction writing began when I was in college with a semester left to graduate and the urgent need to find a job. I started working as a reporter at my hometown newspaper, then was hired by The Associated Press, where I really learned the value of brevity, accuracy, and efficiency in writing. Eventually I shifted into magazines, and that’s where my nonfiction really was able to stretch.

Q: How did your writing expand from this beginning?

Writing for magazines—features and especially columns—let me develop a lyrical voice. I wrote a monthly column for years for Chesapeake Bay Magazine, and much of that focused on the natural world of the bay and emotions it evokes, lots of imagery and description. When I felt ready, I took on novel-length fiction. I attended the Bread Loaf Writers Conference twice studying fiction, took a lot of classes at The Writer’s Center in Bethesda, and formed a writers’ group so we could meet once a month and help each other with craft. I had always hoped I that one day I would write poetry, which for me has always been the pinnacle. When I started writing poetry in 2014 as part of my master’s degree in English at Washington College, it was a revelation. That voice was there, and for once, I wasn’t writing with any expectations or pressure. I was just writing for the thrill of it. Poetry lets me take on subjects in a way that prose never could. It lets me quiet down and cultivate silence. It lets me approach things from a completely new place. I still pinch myself when I write something that has stretched my abilities and opened up my world a little. And hopefully someone else’s, too.

Q: What are you working on right now?

I’m developing a collection loosely structured around the concept of a poetic memoir of transition. Ten years ago, my husband and I sold pretty much everything we had and took our two kids sailing fulltime for four-and-a-half years–homeschooling, traveling, and living a life that was by its very nature pure and constant transition. Now we are back on land, the kids are in college, and while we look “settled,” I still feel like a migratory species, restless and between worlds. These poems are about those worlds, moving between them every day, navigating the inherent homelessness of transition that is being human, whether we see it or not.

Q: Have you been learning or implementing anything new for you on a craft level for this work?

I have been studying eco-poetry and environmental writing in various forms and working frequently with a workshop led by Meredith Davies Hadaway, a wonderful poet who has steadily encouraged and challenged me. I’ve also I’ve been immersing in writing that intensely focuses on sense of place and home through nature and the environment, books like The Peregrine, written in 1967 by J.A. Baker, Wilderness Essays by John Muir, The Living Mountain, written during World War II by Nan Shepherd, and The Wild Places by Robert MacFarlane. Eventually I’d like to pursue an MFA in poetry, but not till I get my kids through college!