A journal like Little Patuxent Review requires a vibrant literary and artistic community to thrive–and even survive. In appreciation of the cultural organizations around us, we present “Meet the Neighbors,” where we provide you with some personal introductions. 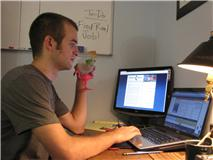 The Baltimore Review's webmaster, hard at work exploring online options with a little libation at hand

These are tough times for literary journals. So when I heard the good news that our good neighbor, The Baltimore Review, was about to be back in business, I rushed to request a re-introduction for our readers. Despite everyone there being swamped by matters no less monumental than moving from a print to an online presence, I was graciously sent the following straightaway:

Please meet The Baltimore Review, residing at, well, we can’t say exactly where it resides since, like many literary journals, it has always been the effort of editorial staff members toiling alone in their basements and at their dining room tables and occasionally together over mojitos and martinis to create eclectic collections of poems, fiction and creative nonfiction. However, we can say that the BR regularly receives advertisements for deals on office furniture and telemarketing calls from the Yellow Pages, which never cease to amuse.

Barbara Westwood Diehl, the founding editor and back at the helm again after a long break from the day-to-day business of completing forms, filing, responding to testy inquiries and making sure that people get paid—no one on the BR staff, of course—will now transition to the first person singular to give you a small glimpse into one editor’s life.

The BR came into being in the mid-1990s when I finally had the opportunity to start a literary journal. I say “finally” because my first attempt was in high school. My first fundraiser was at an Episcopalian church. It brought in about $30 and a number of the attendees left the fellowship hall to go drinking in the graveyard. On the outs with the Reverend and a bit demoralized, I donated the money to the church. I kept writing but my editorial ambitions remained submerged for a good 25 years.

The old ambitions bubbled up when I was involved, first as Treasurer and then as President, with the now-defunct Baltimore Writers’ Alliance. With the help of a talented group of writers, more excitement than sense and seed money from the Maryland State Arts Council, I launched the first BR.

It was a different world back then. No Facebook. No online submission systems. I drove to the post office almost every day to retrieve submissions from the PO box. After sorting them, I drove to reviewers’ houses with plastic grocery bags full of submissions. They wrote “yes” or “no” and their comments on the envelopes and drove them back to me. Acceptance letters and rejection slips were mailed and each issue came together on my dining room table. The first copies arrived at bookstores (most no longer in existence) via the trunk of my car. Then via Ingram Periodicals. What a trip it was.

But if you’re smart, you reach a point when you know that it’s time to let someone else take the wheel. So I did. And I thank Susan Muaddi Darraj for growing the journal, as its own nonprofit, in the years since 2003.

When it came time for Susan to step down, I couldn’t resist the challenge of launching the BR into the next phase of its existence. The fine poet Kathleen Hellen agreed to serve as Senior Editor with me and a number of excellent writers agreed to work with us. I know that all of them will bring wonderful ideas to the table.

With the help of our webmaster, Matt Diehl (yes, he’s my son, which makes his service an incredible bargain), we’ve launched an interim website and are working on ideas for a full and–hopefully–lively site that will keep readers and writers coming back for more. Note that we haven’t kissed print goodbye. Work will still be collected into print issues. And it’s a safe bet that they’ll end up back in the trunk of my car.

The Baltimore Review will re-launch as an online journal in 2012. In doing so, it will join a number of excellent literary publications selecting this route. We wish all of them well!

Note: Works by both Barbara Westwood Diehl and Susan Muaddi Darraj have appeared in the Little Patuxent Review. Go to the Summer 2011 Make Believe issue section on this site and watch a video of Barbara reading her poem, “What the Bee Sees, and Doesn’t See.” Then read Susan’s account of the craft underlying her essay, “My West Bank Education: 1998,” published in the Winter 2011 Water issue.

2 thoughts on “Meet the Neighbors: The Baltimore Review”