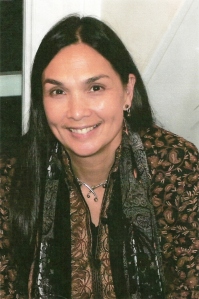 Like many Poetry Friday regulars, I often assign myself a blog project for National Poetry Month. In 2010, I took readers on virtual road trip around the United States, profiling each state’s poet laureate. (I made it as far as Idaho, 43rd state.) Naturally, the tour started in Delaware, the first state to sign the US Constitution. That was my introduction to Delaware poet laureate, JoAnn Balingit. My NPM post includes a sample of one of Balingit’s works and a link to the rest of it. In 2012, her poem “Advisory” opens the Little Patuxent Review Social Justice issue.

Balingit’s latest chapbook Forage was the winner of the 2011 Whitebird Prize. The first section examines Balingit’s bi-cultural heritage. Her mother was born in the Midwest and, at age 19, married a 49-year-old immigrant from the Philippines.

“History Textbook, America” is one of the many standout poems. Balingit recalls finding scant mention of her father’s country of origin in history textbooks. That moment becomes a jumping-off point. The poet meditates on all that we lose when we emigrate, including a brother that she did not know her father had. Just days after her father died, “some man we didn’t know / called up. This is his brother, one more shock, / phoning for him.” The uncle does not have a chance to speak his name before the phone and, therefore, the family connection breaks: “a dial tone erased the Philippines.” The poem expresses our tenuous connection to others and to history.

Balingit’s mother speaks in “My Mother Explains My Father to Her Girls.” The poem describes growing up in the Midwest with a sense of connection to the Philippines. When the sun was setting on the family’s home, “his sky rose story-book, crammed with color.” The speaker’s future husband is “a man / from the islands with the climate of heaven…who grew up wearing hand-woven linen.” He wafts into her life, his voice, “fine as a line cast over water, / land and sink without a ripple.” A strong sense of longing pervades this poem, not only between the lovers but also in Balingit’s desire to understand her parents. Falling in love is beautifully described in the context of her father’s foreignness:

where you are from anything? So I fell
into your father’s voice—
…He glowed
like the boss’s mahogany.

The poem turns when the mother acknowledges the relationship will end in disaster, particularly for her daughters: “I know his silence / branded you as a vine over time will tunnel / the bark of a tree.” The speaker’s final request is that her daughters preserve some part of their father as they mature.

Even poems that don’t deal specifically with Balingit’s family history, such as “Never-Never Land,” refer to her background. “Never-Never Land” is subtitled “after Malay proverbs.” A list of folktale-like what-ifs, “where cats have horns / where turtles climb trees,” evolves into a real world indictment of the current global recession, “where the rich fall down / and the poor rise up like dough in earthenware.” There is a hint of anger in this poem, “the smell of fine clothing / graces an open fire” developing the title into an ironic statement about modern society.

The section closes with a series of poems that cross from imaginative into playfully surreal, including the flash piece, “The Pitch,” and the poem “My Life as the Fugitive, Tijuana.” Although several poems, including “Story I Learn at Forty-nine,” deal with family secrets and hidden stories, the theme is given a wild treatment in the final poem of this section, “Circus.” The speaker knows there are things she has not been told about her own history. Her reaction is both powerful and indicative of the strangeness of families.

I swallow my mother
like a sword in flames
and dare the lioness of her death to wake
me.

The duality of Balingit’s family has echoes in the second part of Forage. It opens with a series of nature meditations, of which “The Blue Spotted Salamander” is one of the strongest. In this section, animals, plants and rivers represent our wild selves, the part of humanity momentarily forgotten in the hum of technology but always available to an attentive mind. In “My Teenager Listens to his iPod as I Drive Back Roads to the Bus Stop,” nature symbolizes what the mother attends to and her child’s self-absorption:

If I take this curve slowly
we will hear the creek consulting on a fawn
that has shrunken to an acorn of thought
tossed in the roadside chicory.

Balingit expresses a longing for the days when, as parents, we constantly interpret and open the world for our young children. The speaker here wants to engage her silent teen in the natural world because that is what captures her own imagination.

At just 38 pages long, there is much to explore in Forage. Even the cover–the title is subtly separated into two parts and can be read as either “forage” or “for age”–plays with one of Balingit’s central metaphors. Landscape, whether it is a roadside creek or the colorful Philippine sunset, accompanies us through the stages and discoveries of life.

Note: JoAnn Balingit will be a reader at the LPR Social Justice launch event, held on January 28.