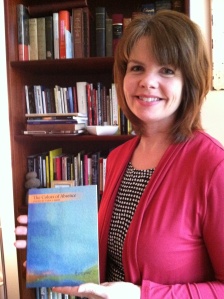 Close to the beginning of the collection, the poem “Hearing Sirens” plays with the idea of magnetism, of women’s iron-poor blood drawn to the “good girls’ kryptonite” of some men and their lodestones. But soon after the sex ends, the heartbreak begins.

The poem “Miss Stein Shows a Way” echoes the recurring ebbs and clanging rhythms of Gertrude Stein’s repetitious verse in a waterfall of sorrow that flows to the edges of the page, sketching out the blurred grief of losing a baby.

In the Pushcart Prize winning poem “Patronized,” the protagonist’s voice–both weary and sassy with grief–speaks a sincere reaction to the sentimentalized saint on the prayer card given to a mother. That paper rectangle with its pious picture and all it represents is clearly inadequate to ease her pain. The clever word play and religious imagery contrast and blend to create a poem that both cries out in grief and raises a sarcastic protest to sacred comfort.

That tone of down-to-the-bone sadness living in a world of platitudes continues in the poem “No Such Thing,” which mixes the theory of relativity and paintings of nudes to come up with the idea of moving through misery, just getting ourselves out the door in the morning, preferably with clothes on and upright.

We move with the poet through the brightening of her path, as she gives birth to another baby, a boy, and snarls with a “venom fantastic” at the dangerous drivers paying no heed to the new and precious cargo in the car riding home from the hospital in her poem “Bringing Him Home.”

And the giggles strike when the poet writes “This Girl at Four,” speaking about a daughter, aged four and clad in frog boots, packing a pumpkin flashlight and three strawberry candies for adventure.

The protagonist’s cracks mend, her life teems full with new life, another baby, friends. Ultimately, though, the collection’s last poem is one of gratitude toward the lost baby, for that small life that filled the poet’s own and for the power to say what she means about her loss and gain.

Tara Hart chairs the Howard Community College Division of English and World Languages, where she teaches creative writing and literature. Her poems, including “Patronized,” have been published in Little Patuxent Review. For the full text of “Patronized,” see “Saints Alive, It’s a Pushcart Nomination.”

2 thoughts on “Book Review: Tara Hart’s The Colors of Absence”