Between belief and disbelief, certainty and uncertainty, trust and distrust lies doubt. Doubt can be deliberate questioning or a state of indecision, resulting in a reassessment of what reality means or a paralyzing suspension between contradictory propositions. An uncomfortable condition, as Voltaire observed, but preferable to certainty, which is inherently absurd. Or some surprising gap stretching intellect and emotion, resulting in delight. Join us in this intriguing gray area as we prepare our Winter 2013 Doubt issue. 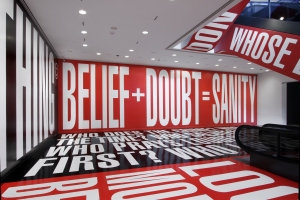 If there’s such a thing as a God gene, as Dean Hamer has hypothesized, I must at the very least be a carrier. My father, Viktors Jurģis, once pursued a theology degree at the University of Latvia and a cousin, The Very Reverend Juris Jurģis, managed to catch one at the University of Oxford. But there’s many a slip ‘twixt the genotype and the phenotype, so at an early age I became a confirmed skeptic.

Still, I was attracted to writers who were able to pull back a bit from the constant navel gazing that seems to be an occupational hazard to consider more cosmic questions. Even as a teen, my favorite poet was TS Eliot, whose “The Waste Land” and other works not only defined nihilism for his and subsequent generations but also formed the basis for his becoming a staunch Anglo-Catholic. And as an adult, I’ve frequently found myself wondering why–particularly in the United States, which stands alone among developed nations in its emphasis on religion–literature is so secular. So, I asked Avraham Azrieli, a local novelist interested in such matters, to briefly share his thoughts on the subject.

Here’s what he had do say:

I don’t see how a novelist can write truthfully about people while avoiding their religion. For that matter, I don’t see how a writer of nonfiction can credibly author a book about history, politics, crime or psychology while skipping over the dominant role religions play in human life and death. Most curiously, though, is the difficult choice facing the storyteller: is religion a protagonist or an antagonist?

In my novel The Jerusalem Assassin, the leader of an ultra-Orthodox Jewish sect, Rabbi Gerster, must prepare his heir Benjamin to take over the leadership.

“A leader must not be timid.”

“Is there a difference?” Rabbi Gerster chuckled. “You know what Ecclesiastes said about the cycle of life, yes? Everything has a beginning and an end.”

“True. And a time to plant and a time to root out the planted.” He squeezed Benjamin’s arm. “All the sages interpret Ecclesiastes as a serious philosopher, but I sometimes think he was writing comedy.”

“You could read his pontification as joking about how our scriptures—everyone’s scriptures, in fact—can be read to support contradictory agendas, how the righteous can find divine authority in the scriptures for anything one wants to preach—love and hate, forgiveness and revenge, peace and war. You can find words in the Torah or Talmud, in the Koran or the New Testament, to proclaim God’s divine support of your agenda, whatever it is—and I say this from experience.”

They reached the entrance to the apartment building where Benjamin lived. He leaned against the stone wall, as if feeling weak.

“But Talmud is the absolute truth, right?”

“Absolute truth is in the eye of the beholder,” Rabbi Gerster said.

As a novelist, my biggest challenge is to be true to the way each character would behave considering his or her background, personality and complex identity. Only then does the story become believable to the readers. And primary among those traits is how a character practices his or her faith–is it a tool, a shield or an inspiration? The test is whether a person remembers that faith by its very essence is the belief in something that cannot be proven.

This is even more challenging in the real world. A friend of mine, a devout Lutheran, told me recently that he couldn’t understand how any person of faith could support same-sex marriage. “I believe that the Bible is the one and only truth, and the Bible tells us that marriage is a union between one man and one woman.”

I pointed out to him that biblical marriages did not always involve one man and one woman and often created a union between one man and a bunch of underage girls, sold by their fathers for gold, goods or services, as in the case of Jacob and his wives. Biblical husbands owned their wives as they owned livestock and slaves. In fact, the biblical Hebrew word for husband is “ba’al,” which can mean “owner.”

One can only speculate whether human conflict throughout history would have been less hostile if those who carried the torch of their religion remembered that each faith could not be an absolute truth, not only because faiths contradict each other with equal validity and inability to prove one truer than the other but also because, in the absence of doubt, faith is nothing but an uninspiring alternative reality.

Reflecting on what Azrieli says, I recall that in college my father not only professed the Lutheran faith but also hung out with Old Testament types such as his rabbi pal, who helped him learn to read that part of the Bible in the original Hebrew. That rabbi likely resembled Azrieli’s fictional rabbi, with whom my father would have enjoyed matching wits. In his latter years, my father was limited in his choice of sparring partners. Much to my mother’s dismay, he was known to invite the Seventh-Day Adventists and other proselytizers who knocked on his door inside for further discussion.

“What would you do,” he would ask, “if you saw that all the medical books in your doctor’s office were written in the Nineteenth Century?” “I’d definitely get myself a new doctor,” they would say. “Then, would you not at least consider getting a second opinion knowing that the only book that your minister relies upon, which I assume is the King James Bible, was translated in the Seventeenth Century from a First Century work?

Avraham Azrieli is an attorney and author living in Columbia, Maryland. He published two nonfiction books, Your Lawyer on a Short Leash: A Survivor’s Guide to Dealing with Lawyers and One Step Ahead: A Mother of Seven Escaping Hitler’s Claws, before turning to fiction. His novels include The Masada Complex, The Jerusalem Inception, Christmas for Joshua, The Jerusalem Assassin and The Mormon Candidate.

For more from this series, see Dylan Bargteil’s “Delving into Doubt: Worship No Idols.” For more about the exhibit in the image above, see “The Unsettling, Text-Driven World of Barbara Kruger’s ‘Belief+Doubt'” in The Atlantic.

5 thoughts on “Delving into Doubt: The Doubtful Virtue of Religious Certainty”