When we think of immigration we often do not consider that it is fundamentally a sensory experience and, to a great extent, a visual one. It is an experience of the urgent and compelling power of images, of still frames and snapshots always near at hand, ready to be sifted through and periodically unpacked.

Sure, immigration calls to mind the usual experiences and the associated malaise: the displacement, the deracination, the nostalgia for the homeland left behind as well as the mixture of excitement and sometimes numbing trauma of adapting to a new culture. But those feelings are often first experienced as vivid pictures and only later given language.

The pictures become the vessels that carry forth the emotions, capturing the fullness of memories. That has been my own experience. Emigrating from my grandparents’ home in Haiti with virtually no forewarning to begin a new life with my parents in the United States, images have given me a way into the maze of feelings. 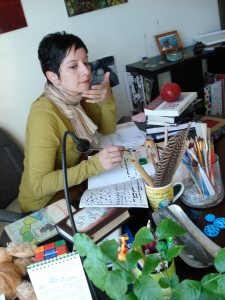 The tableau of images that Pantea Tofangchi paints from her experiences as an immigrant in the United States and her childhood during the Iran-Iraq War serves a similar logic of return, each visit revealing new layers of insight.

What first struck me about Pantea’s poetry was how single images persist from the beginning of a poem to the end, images as trenchant and vivid as the fields of flowers in Majid Majidi’s film The Color of Paradise. And yet, like the film, her imagery betrays a softness, a gauziness around the edges that creates an opening through which the reader is invited to experience the disquietude, to wonder about what is not known, what isn’t understood, what isn’t said.

The experiences of which she writes—the alienating effect of a confrontational exchange with a stranger in a Barnes & Noble bookstore about her lack of a headscarf, the dread of nighttime in a Tehran preemptively plunged into total darkness during the war’s frequent air raids, the roving old man devastated and lost to Tehran’s streets after losing family in the bombing of Khorramshahr—are rife with uncertainty. The sense of disorientation, of the instability and fragility of those worlds, is deeply felt. The panoply of images seems to be a vehicle for exploring the complex and tentative emotions of both her immigrant experience and of growing up in war.

Such dexterity with imagery is not surprising since she is not just a writer. She is also a graphic designer for Passager Press and teaches typography and graphic design at the University of Baltimore Creative Writing & Publishing Arts program. She understands both the linguistic power of images and the sensory power of language.

Here is what she had to say about relocating to the United States and how war and immigration have shaped her writing:

My husband and I emigrated to the States in January 2000. My husband, who is a physician, wanted to get his specialty and subspecialty in the States, but I didn’t want to leave Iran. I never thought that I would be able to leave my homeland for good, so at first I thought of it as a long trip of discovery and adventure.

I think I physically relocated, but it took me some years to realize that I had to actually leave home, too. I think it is fair to say that in the beginning I simply followed my husband, which somehow made it a little easier for me as I didn’t need to make that decision.

Sometimes I ask myself if I would make the same decision if I could go back in time. I’d be curious to know what I would have become had I stayed. I used to be a journalist back in Iran: young, wild, fearless. But there is no future for journalists there. Sometimes there is no present, either. But even with all the obstacles, there are a lot of brave journalists working and trying to make their voices heard.

Right before we left, the government closed the newspaper where I worked, along with many others. I think that made it easier to leave, or maybe to let go. But do I still have doubts about having left? Yes, I do. And some have taken a new form.

Most of us—not just as immigrants but as human beings—live in uncertainty. As a writer, thinker and graphic designer and, perhaps, as an artist in general, uncertainty is my muse. I’ve learned that some things are meant to be left tangled. I carry my doubts everyday like a piece of clothing. Some days I wear it as a colorful scarf around my neck, just an accessory; on others, as a shirt that is too tight, almost uncomfortable; and still on others, as a comfortable pair of jeans.

I believe that the reason I became a poet has to do, in large part, with the experience of being bicultural, in between worlds. One of my biggest challenges as an immigrant was finding my writer’s voice in English. I was lost for years. I didn’t trust myself enough to write in English, and I didn’t want to write in Persian. I wrote a little and sent some articles back home. But I felt I was cheating, living in an English-speaking country, yet writing in another language.

After we moved to Baltimore, I enrolled at the University of Baltimore for my Master’s degree, where I found a home. I began to realize that it is an advantage to be different, to have two cultures. I found some of the best teachers in the world there. They helped me to find my voice in poetry. I had so much to say. Poetry was the answer: I could say so many things with so few words.

As a graphic designer and teacher of typography, everything is an image. I think about every letter that I put on a piece of paper, like a drop of paint on a white canvas. When I write, it is important for me to paint an image, to see it and smell it, too. Sometimes I even need to touch it.

To me, each letter is an image, especially Roman letters. I get to know them based on their shape first, because I look at them completely differently since my native language Persian is very different. Maybe that is how the letters became very tangible, like pictures, like colors, to me. I found Roman letters so generous and versatile. They enabled me to express my culture, which is so colorful: turquoise, pomegranate red, grass green, fire orange. The letters never doubted my identity. They didn’t care about my accent, so it was a perfect match.

After 12 years, I think I am settled down. But is this home? It is, and it is not at the same time. I miss a lot of things about my homeland that are hard to explain. Intangible things. The soil, the smell of the acacia tree near my parents’ apartment, the smell of the local bakery near our old apartment. I miss the Alborz mountain range that surrounds Tehran.

Yet, whenever I go back, I have this strange feeling in my stomach that I no longer belong there and miss my home back in the States. And when I come back, I always ask myself, do I belong here? Most of the time, my answer is no. I think a lot of first-generation immigrants feel the same way, tiny ants lost on a plastic globe. Living in uncertainty makes me creative, it makes me aware of the world around me.

The Iran-Iraq War was very hard on my soul. I couldn’t understand the concept as a child, and I still don’t understand it as an adult. I wrote a few short stories about it when I was a kid, but after the peace agreement between Iran and Iraq, I kind of put it aside, though it was always there inside me.

In the past few years, with the possibility of more wars likely, I started writing about my experience in war. I wrote every morning for two months. I read a William Stafford poem, then wrote a poem of my own. As I went through this ritual, I found memories that I didn’t know I had. I am very proud of the manuscript. I feel that I did something important, as if this was the reason that I became a poet. Now, I have to find a way for people to read it, especially those who think that war can bring peace.

When I think of finding my identity in another land, the Chinese proverb “limitations make you creative” comes to mind. The forms of poetry, a sestina or a sonnet, for example, impose a structure, but the poet is free in terms of subject matter. With the immigrant experience, something similar yet a little different happens: I am free in terms of structure or form but somehow limited in the subject matter.

Do I do that intentionally? No. Even when I write about a completely different subject, a line finds its way into my poem that is recognizable as an immigrant’s voice: doubtful, fearful sometimes—especially of another war. Hesitant, unsure. I do not mind this, though. This is who I am. This is who I will be. An immigrant. Sometimes with no home, and sometimes with two.

Tapping into the sensory nature of war and immigration has helped Pantea embrace the fertility of doubt. Without trying to dispel these feelings, she has transformed them into doubt’s offspring: fascination and curiosity. Both are necessary ingredients for creativity and for making, as she says, “something good of whatever happens.” 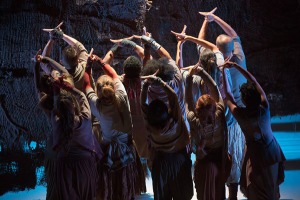 The cast of the 2012 Folger Theater production of Conference of the Birds. (Photo: Scott Suchman)

2 thoughts on “Images of War and Immigration: Pantea Tofangchi”