Invisible Man was published in 1952. In the prologue, Ralph Ellison wrote:

I am an invisible man. No, I am not a spook like those who haunted Edgar Allan Poe; nor am I one of your Hollywood-movie ectoplasms. I am a man of substance, of flesh and bone, fiber and liquids–and I might even possess a mind. I am invisible, understand, simply because people refuse to see me.

That year, I was a second-grader in Michigan, feeling equally invisible. Not in any obvious way, since my funny braids and my funny name—I was then Ilze Jurģis—and the funny language—Latvian—that I was required to speak when I was around my parents brought me undesired attention. Rather, it was because no one wanted to see what I was like and what my circumstances were.

Moreover, events conspired to ensure that I cast no shadow. Much of my birthplace—Valmiera—had been burned to the ground by the Red Army. My native land–Latvia–had been absorbed by the Soviet Union and hidden from the West by the Iron Curtain. An uncle had been forced to labor in a gulag at a secret site in Kazakhstan, and massive sections of the letters that he sent us had been obliterated by redactors. And Russia, recently a United States ally, was now a Cold War adversary. It was convenient for Americans to turn a blind eye.

Slowly, what was invisible about me became a source of shame. For decades, I attempted to pass as a native-born American and succeeded surprisingly well. But sometime around my father’s death, I felt an urgent need to assert my identity. And sometime after that, I started to write, as my late father had once done. I sought out other Latvian writers but, consistent with the hodge-podge person that I had become, my favorite—Pauls Toutonghi—was only part Latvian. Another part was Egyptian. What on Earth could I do with that?

On February 10, 2011, I realized what that was. Protests against the government in Egypt had entered their 17th day. Tens of thousands had packed Cairo’s Tahrir Square, chanting, “Hosni’s leaving tonight! Hosni’s leaving tonight!” But President Mubarak failed to say what the crowd wanted to hear and it looked like the next day would only bring violence. That was when I wrote Pauls this:

Whatever happens tomorrow, you can be proud.

Growing up as a Latvian refugee in Grand Rapids and later living in Boston as an adult, I had no heroes to point to. The Hungarians had their Freedom Fighters, the Polish people had Solidarity and Lech Wałęsa. Latvians—from my narrow perspective—seemed willing to wait for others to liberate them.

What is happening in Egypt makes me proud that there are people who have the courage and the intelligence to stand up to tyranny without resorting to senseless violence. I watched amazing footage where one man turned around an angry mob just by positioning himself in the forefront and holding up his hands in peace signs.

You may have your own opinion on what Latvians should and should not have done to oppose their Soviet oppressors. And I now know that I never had the right to judge from the safety of the United States. But what is clear is that you can be incredibly proud of the Egyptian part of your heritage.

I hope with all my heart that the Egyptian people attain the freedom that they deserve without the bloodshed that I fear. At last, I have heroes.

When I heard that Pauls was traveling to Cairo in March, I was pleased. And since I could not go myself, I did the next best thing: I asked him to describe his stay for Little Patuxent Review. On August 23, the day of the East Coast earthquake, I received his account. This is was what I read once my house stopped shuddering:

It’s funny the way that time recedes, moving, as Virginia Woolf said, from the “incandescent present moment” to the distant, buried past. The events in Egypt have continued to unfold—of course they have—but it was startling to see Mubarak hauled before the court, a few weeks ago, in a cage. This was a man who’d haunted the country when I was there in March, a man who’d come to epitomize the daily struggles that so many Egyptians faced—simply to survive.

I know friends on the liberal side of the spectrum in America who looked at Egypt with some envy. Why couldn’t we have seen similar images of George W. Bush, they thought, whose crimes were much larger in scope and in violence? But America is a society predicated on not jailing its former rulers (most of them, anyway). And yet the feeling was still there, for some. 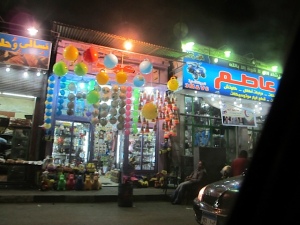 Looking at Cairo at night through a cab window (Photo: Pauls Toutonghi, March 2011)

I’ve never written about most of what happened in Egypt over the time that I was there. (The essay for Harper’s will be published this December after several delays.) Some of it is of value only to me, things that were personally important but that wouldn’t matter to most readers.

One thing that has stayed in my mind, though, is a ride in a cab through the chaos of the riots on the night that the Interior Ministry burned. The city teemed around me in darkness. It was ten, maybe eleven. An hour before curfew. Neon shop lights everywhere. Our driver gave us his cell phone and played a video that had been circulating via SMS message in the Middle East.

The video showed the sky above Cairo the night that Mubarak resigned. The clouds seemed angry and clearly—so clearly, shockingly clearly—there were two eyes, eyes in the clouds, unblinking but clear, black-lidded and ominous. Was it a doctored video? Probably. But for that incandescent present moment it was possible to believe in the thing itself, in the image living there in the little dented taxi, before me.

I found the “Eyes in the Sky” video on the Internet. Displayed on a 27” iMac screen, it was beyond a doubt doctored. But I also found the NASA Helix Nebula image that had gone viral in the States as “The Eye of God.” That made me think how much it means to people everywhere—including those Latvians that I had discounted, yearning for their freedom—to believe that someone is watching. And how any mere mortal can do that for the invisible. A reporter, a poet or writer, an artist. A kid holding up a cell phone camera and snapping away.

Pauls Toutonghi was born in 1976 in Seattle, Washington. His first novel, Red Weather, was published by Random House in 2006. It was translated into Latvian and published in Riga—where it has sold, as far as he knows, over a dozen copies. His writing has appeared in Sports Illustrated, The New York Times, One Story, Zoetrope All-Story, The Yemen Observer, Glimmer Train and other places. He teaches at Lewis & Clark. His new novel, Evel Knievel Days, will be published by Random House in July 2012.

After seven decades, Latvia’s struggle is finally coming to light. Through the remarkable documentary The Soviet Story by author and director Edvins Snore. Through Anatol Lieven’s penetrating study The Baltic Revolution: Estonia, Latvia, Lithuania and the Path to Independence. Through personal accounts, the best know of which is Agate Nesaule’s A Woman in Amber: Healing the Trauma of War and Exile. And my own belated contribution, the short story “Making Soup,” available online at TriQuarterly.

“On Being Invisible” is the first of a series of essays leading up to the publication of the Little Patuxent Review Winter 2012 Social Justice issue. This series will feature individuals who have helped make marginalized segments of our world visible to mainstream America through poetry, prose and visual art.

9 thoughts on “On Being Invisible”