This essay is part of a series inspired by our Winter 2012 Social Justice issue. The first one was posted September 2011, and all feature people who have helped make marginalized segments of our world more visible to mainstream America through poetry, prose and visual art.

In the Sixties, nearly everyone I knew was–directly or indirectly–touched by the Vietnam War. Even my then husband, who carried a British passport and had an educational deferment, received the letter with the chilling salutation “Greetings” from the Selective Service System. These days, although we only pulled out of Iraq a few months ago and are still fighting in Afghanistan, I don’t know a single soul who has recently served or is likely to serve in a combat zone. With the end of the draft and the ensuing all-volunteer armed forces, only 0.75 percent of Americans are in uniform and–despite our being constantly bombarded with combat footage–remain mainly unseen by most of the rest of our nation.

Moreover, our service members are more likely than ever to remain invisible once they return home. There simply aren’t the number of funerals there once were. Advances in a range of areas have ensured that nearly 90 percent of Iraq and Afghanistan casualties survive their injuries, far more than in previous wars. And while limbs are still lost and faces disfigured by burns, traumatic brain injury is now the “signature injury” and post-traumatic stress disorder is on the rise, along with suicide attempts and prescription drug abuse. All far harder to detect for those who don’t have to deal with them directly.

So, if ever we needed to hear what those who put themselves in harm’s way have to say and if ever our “wounded warriors” needed to express themselves more, it is now. Fortunately, efforts are underway to help service personnel tell their own stories in their own way. One of those is the Veterans Writing Project, started by Ron Capps. I asked Ron to share this thoughts on how his own combat experience led to his developing the Project. Here’s what he had to say:

I was a soldier for 25 years. In those days, my uniform could speak for me. Anyone who had learned the visual patois of the badges and patches and ribbons and pins would have known that I was a paratrooper who had seen combat in Afghanistan, that I had been decorated for valor, that I had served on humanitarian aid and peacekeeping missions. But by simply looking at my uniform no one would have known that I was a combat casualty, that I was medevaced from a combat zone.

Most combat casualties are entitled to wear the Purple Heart medal; I am not. In some ways, I’m exceptionally lucky. I wasn’t shot or blown up. I don’t have a prosthetic leg or hand or scars that you can see. I’m a combat-disabled veteran, but my wounds are invisible. I was in five wars in 12 years: Rwanda, Kosovo, Afghanistan, Iraq and Darfur. I was evacuated from Darfur because one evening at sundown I drove into the desert alone, intent on killing myself, but was interrupted in the act.

Though I never put that bullet into my brain, I’m still a casualty. I’ve seen and participated in too much violence, too much death, too much war. Post-traumatic stress disorder is an invisible wound. Maybe 25 percent of the 2.3 million returning Iraq and Afghanistan veterans have or will develop it. Some of us will eventually be fine. We’ll get the treatment we need and take our meds. We’ll cope. But others will not. Possibly because no one will reach out to provide the skills needed to survive. 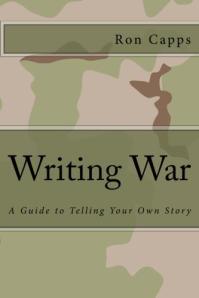 The second edition of Ron's guide is now available.

Writing helped me get control of my mind and my memories. In a very real way, I wrote my way home. About a year ago, I decided to try to reach a few other returning veterans and offer them a hand. I founded the Veterans Writing Project. We provide no-cost writing seminars and workshops for veterans, active and reserve service members and military family members in an effort to give participants the skills and confidence they need to tell their own stories. This might be just the help they need to cope. I hope so.

Like most soldiers, I suppose, when I left the military, I hung my uniforms in the closet upstairs. Cocooned into plastic zipper bags, our uniforms can no longer speak for us. Even intact, adorned with all the qualification badges, unit patches and colored ribbons, they no longer have the ability to communicate. Since our uniforms can’t speak, we have to speak for ourselves or else become invisible. There is too much is at stake to remain silent. There are too many stories that need to be told.

This month, the Veterans Writing Project formed a partnership with the University Writing Program at The George Washington University. “The [Veterans Writing] Project is different in several ways from other writing programs because the writing we do helps us shape the memory of the project participants,” Ron said in a GW Hatchet article. “It’s hugely gratifying to see the men and women we’ve taught, coached and encouraged share their stories.” GW boasts a large veteran population, with more than 700 receiving financial aid through the Yellow Ribbon Program.

Operation Homecoming, funded by the National Endowment for the Arts, has similar aims. With help from Ron and The Writer’s Center, writing workshops start this year as part of a formal medical protocol at the Walter Reed National Military Medical Center in Bethesda, Maryland. The NEA previously funded a book, Operation Homecoming: Iraq, Afghanistan, and the Home Front, in the Words of U.S. Troops and Their Families, and a PBS documentary, Operation Homecoming: Writing the Wartime Experience.

Ron Capps enlisted in the National Guard in 1983, received a commission in 1985 and served on active duty for nine years before returning to the Army Reserve. As a reservist, he was recalled to active service for work with special operations forces in central Africa, a combat tour in Afghanistan in 2002 and 2003 and work as an international peacekeeper in Darfur. He served as a foreign service officer from 1994-2008, with postings in Kosovo, Rwanda, Iraq and Sudan. He is currently a freelance writer whose work has appeared in peer-reviewed policy journals, popular foreign policy websites and literary journals. His essays and commentary have been broadcast on the BBC, NPR’s All Things Considered, NBC and Pacifica Radio. His Writing War: A Guide to Telling Your Own Story is now out in a second edition.

Note: “Crafting a Bridge to Healing” by Ann Bracken, which addresses a disturbing issue for women in the military, appears in our current Social Justice issue. Regina Vasquez, whom Ann interviewed for the piece, will be participating in an upcoming veteran’s art show, “Overlooked/Looked Over,” in Chicago.

2 thoughts on “On Being Invisible: Our Nation’s Veterans”