This essay is one of a series inspired by the Little Patuxent Review Winter 2012 Social Justice issue. The first was posted September 2011, and all feature individuals who have helped make marginalized segments of our world visible to mainstream America through poetry, prose and visual art. 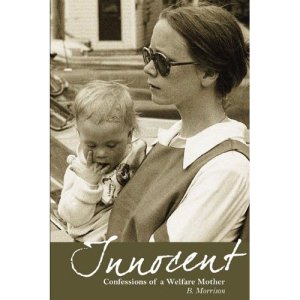 This September, the Census Bureau released a report indicating that a record 46.2 million, or one in seven Americans, lived in poverty last year. August 2010, USA TODAY reported survey results showing that government anti-poverty programs that have grown to meet the needs of recession victims serve a record one in six Americans and continue to expand.

Though these statistics should be a warning that the odds of any of us needing access to some form of welfare have increased, most of us living in the 7th or so richest nation in the world have little idea what this entails. And available data sets are unlikely to capture the essence of the experience. That might require a poet.

Fortunately, we have one in Barbara Morrison, whose memoir Innocent: Confessions of a Welfare Mother was published this July. While Morrison addresses a period prior to the 1996 welfare reform act, her portrayal of people on public assistance is pertinent today. Here, then, is Morrison, in her own words:

When my marriage dissolved, I found myself with a one-year-old baby, another on the way and no job, health insurance or child support. Despite having a college degree, I could not find work with a salary sufficient to cover food, rent and childcare costs. Welfare was the only way for my family to survive. As my friend Jill asked, “How bad do your choices have to be before welfare seems like your best choice?”

My story is not unusual.

A friend told me that while recommending my book to her friends, one of the women said, “That’s my story.” A widow with three children–the youngest only three months old–she had a Masters degree in counseling and still couldn’t get a job that would pay enough to support them. The economics are simply against single women with pre-school children requiring child care.

Quite a few of my business colleagues, upon hearing about my book, have told me that either they or their parents had also been on public assistance. Why hadn’t any of us mentioned our backgrounds before? Because there’s a stigma associated with welfare, which keeps people who need assistance from applying for it.

In a new afterword to the seminal Nickel and Dimed: On (Not) Getting By in America, Barbara Ehrenreich tells of returning ten years later to see whether things had changed for those in the bottom third of the income distribution. “The most shocking thing I learned from my research on the fate of the working poor in the recession was the extent to which poverty has indeed been criminalized in America.”

In a recent discussion, two participants told me that people “choose to be poor.” When I was on welfare, no one I knew had elected to be poor. A few had given in to the hopelessness that I also fell prey to after so many of my efforts proved futile. But most were like Margie:

A Hispanic woman I visited, Margie, had newborn twins and two daughters, one of whom was going to Head Start. Margie’s twin 16-year-old brothers also lived with her. We sat around the kitchen table talking for a long time. She was interested in my classes, but all her spare time was dedicated to getting a job so she could get off of welfare. I didn’t say anything. We all wanted to get off of welfare, but I didn’t see how Margie could hold down a job with six kids in the house, two of them newborns at that.

David K. Shipler, in the extraordinary book The Working Poor: Invisible in America, correctly identifies the combination of factors needed to combat poverty. In order to work, people need more than food and housing. They need reliable transportation and child care. They need training and workplace contacts. They need to learn how to write a resume and handle a job interview. I needed all those things and was lucky enough to receive them.

Let us ignore the stigma and tell our stories. Let us set the truth against the misconceptions and stereotypes so that we can begin to approach real solutions.

Women who have previously told their stories include Richeline Mitchell, who wrote Dear Self: A Year in the Life of a Welfare Mother; Mary Childers, who wrote Welfare Brat: A Memoir; and those in Jason DeParle’s American Dream: Three Women, Ten Kids, and a Nation’s Drive to End Welfare.

Barbara Morrison is the author of the poetry collection Here at Least as well as the memoir Innocent: Confessions of a Welfare Mother. Her work has been published in The Sun, Scribble and Tiny Lights. She has won Society of Southwestern Authors and National League of American Pen Women awards.

One thought on “On Being Invisible: Welfare Recipients”