The “Concerning Craft” series introduces Little Patuxent Review contributors, showcases their work and draws back the curtain to reveal a little of what went into producing it. 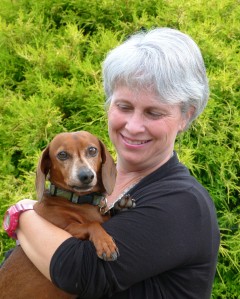 Her stories have appeared in LUMINA, Blue Mesa Review, The Portland Review, Still and New Southerner. She teaches in the Great Smokies Writing Program at University of North Carolina Ashville and at Brevard College, where she serves as the creative nonfiction editor for Pisgah Review. She enjoys mountain biking, hiking and running with her five dogs.

Jennifer’s story “Deviance” was first published in our Summer 2012 Audacity issue. We invite you to read the story here and consider what she’s shared with us about the writing of that piece:

I come from a family of great storytellers. When I think about what to write, I gravitate toward stories that I have heard over and over at family gatherings or that come up when I’m out with friends and we’re on our second round of margaritas. “Deviance” is one of those stories.

In it, I am 24 years old and working as part of a research team studying the availability of services for mentally disturbed adolescents. My boss, who has become a friend, keeps a fifth of vodka in her desk and tells me that she hired me because I confessed in my interview that I was fascinated by deviance. I am newly married–for the second time–and pregnant. When I am seven months into my pregnancy, my boss sends me out to interview a 16-year-old kid whose dad is on death row. Halfway through the interview, the kid propositions me.

I began “Deviance” by free writing about that experience. When I asked myself what the story was really about, it quickly became clear that it was about the fact that I have always been drawn to the darker sides of people’s personalities—my own, the men that I have dated and others. Once I realized that, I let the form move in an organic way, which was how the flashbacks came to be.

Flashbacks mimic the way that we experience things in real time—not chronologically but in relation to all our other experiences. In this piece, the flashbacks evolved as a way of talking about how my past experiences affected my responses to this boy. For example, I am looking at this kid but remembering a similar boy from my not-so-distant past, a boy I dated in high school.

Through this process of writing and remembering, it also became clear to me that the story was also about a time in my life when I made a choice about the kind of a person that I wanted to be, the kind of mother that I was going to be. By juxtaposing certain memories with the narrative, I hoped that the reader could see this as well.

In oral storytelling, there are often moments when the narrator slows down or moves outside of the immediate action and leaves the listener suspended just long enough to feel a certain tension. This strategic use of the pause, a technique that we easily recognize when we hear it, has a counterpart in the written word. In writing, pauses create space for the narrator to think, reflect and feel.

In “Deviance,” I created tension during my interview with this wayward boy by interrupting dialogue with observations. Here is an example:

Ryan took a step toward me, and I realized he had said something.

“Do you want to meet up with me later?” he repeated.

I looked hard at him to be sure I had understood correctly. His tone was casual, but his expression was not.

He moved closer, his eyes never leaving mine. My baby kicked my ribs.

“Do you want to finish this another time?” I asked.

With his left hand, he reached out and caught the billowing hem of my top. His eyes were piercing and raw.

“I can’t,” I said, pulling away. “There are rules against that.”

The baby kicking my ribs and Ryan grabbing my shirt hem interrupt the dialogue just long enough for the reader to feel the tension that the narrator feels. Something is not right here. Something just below the surface is dangerous. And maybe it is the boy who is dangerous, or maybe there is some greater, less tangible danger present.

Finally, I wanted the ending to bring the reader back to the conflict within the narrator. I remembered that when I quit the job just before my son was born, I told my boss that I wanted to stay at home so I could perform domestic tasks such as matching my husband’s socks. This illustrated my earnestness and naïveté.

I interrupted it with a flashback that reflected that tug between my younger, more careless self and the part of me that wanted to be a responsible wife and mother:

“You want to match your husband’s socks?” Sylvia asked.

It sounded strange, even to me. I stared over her head to the pink magnolia tree outside the window. One by one, the blossoms were unfolding and scattering onto the ground below. A delicate, pink blanket covered the grass.

My husband, David, and I had dated for a while when I was in high school, but things didn’t work out, and a few years later I married a man I had known for only three months, a man who was affectionate and passionate one minute, relentlessly brutal the next. That marriage lasted less than a year, and then my baby and I were back at home, living with my parents. David and I hadn’t spoken in two years when I called him one night.

“David?” I asked when he answered.

Later that night, at his apartment, David sat in an armchair, and I sat on the sofa across from him, my infant daughter stretched across my lap. We talked as if no time had passed, as if this happened every day, a divorced woman with a baby coming back to visit a guy she dated in high school. Later, David walked me outside. It was January, and the wind cut through the trees. Snow drifted past the streetlights. Snuggling my daughter against his black leather jacket, David rocked from foot to foot while I searched through my purse for my keys. And when I took her from his arms, she was warm, her tiny hands balled into fists against her cheeks, and she smelled like Johnson’s Baby Shampoo and leather. Two years later, David and I were married.

“Yes,” I said, looking directly at Sylvia now. “Yes. I want to match my husband’s socks.”

And then Sylvia finally uttered the word her mouth had been forming.

There is no strong resolution here, just the suggestion that my love for these two people—and, implicitly, for my unborn son—will be the guiding force in this next stage of my life. The result is a piece that may pose more questions than it answers.

As a writer, I struggle with the impulse to assign meaning or bring resolution to everything that happens. In several versions, I included a paragraph about my infant son at the beginning. It was full of motherly love and illustrated that I turned out to be a decent parent. I wanted to wrap it up from the beginning, to let the reader know how things turned out. However, this was not the right place for that paragraph.

And maybe that is what separates art from its scholarly cousins. In academia, postulation is a means to an end. In art, the questions themselves are worthy.

Note: If you enjoyed Jennifer’s story and want to read more prose and poetry from our Audacity issue, you can purchase copies of that issue and others online.