Jen Michalski explores what it means to be vulnerable in a modern society. 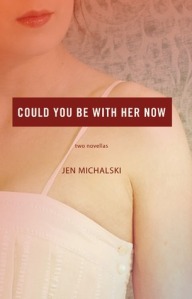 At first blush, it appears that the only thing that the two novellas that comprise Jen Michalski’s collection Could You Be With Her Now have in common is that both are penned by the same author.

In the first novella, I Can Make It to California Before It’s Time for Dinner, the protagonist is a 15-year old intellectually delayed boy named Jimmy who thinks that he has walked to California when he happens into a house where a bikini-clad girl is sunbathing in the yard. The girl, Jimmy thinks, is his favorite TV character Meghan, and his encounter with her sets off a series of events akin to silent, miniature explosions of mounting small destructions that can’t be undone.

In the second story, May-September, perspective shifts between an older woman, Sandra, and a younger one, Alice, who initially come together over a business transaction—Sandra hiring Alice to help her launch a blog about her life for her grandchildren to read. Their interactions slowly transform into something else, a relationship that indelibly changes them both.

In both stories, Michalski deftly explores what it means to be vulnerable in modern society, what it means to be invisible, powerless, voiceless—either from mental or physical frailty–but struggling to matter in the world just the same. How carelessness and resentments on the part of family members can inadvertently thrust their vulnerable loved ones into situations that bring unexpected, unwanted, painful consequences.

What sets Jimmy on his misadventure is his older brother Josh’s careless selfishness. Josh, who wants to watch the TV that Jimmy is already watching, pushes him out the door with the directive to find the TV character Meghan, a directive that Jimmy takes seriously. Jimmy, of course, gets lost, but this is the experience with the girl he believes is TV Meghan and that sends him down the rabbit hole as a modern-day Lenny:

Megan bites my hand. I push her away. She is smaller than me and falls against the glass door. I feel bad and put my arms around her to pick her up. We are half the way up. She hits me in the chest and the face. I get mad like when Josh hits me and leaves marks. She hits me in the face again and it hurts bad. I put my hands on her neck and twist real hard, back and forth. She puts her hands on my hands but I am bigger. Her face turns all red and its’s kind of funny how red.  She keeps moving and kicking and I try to stop her. We are half the way when she falls asleep on me. She is so heavy I let her fall and then I wait for her to stop make-believing because people on TV are always doing make-believe.

Later, after Jimmy returns home, unaware that he has fatally hurt the girl, Josh once again puts Jimmy in harm’s way through a misguided attempt to protect him. Josh’s carelessness about Jimmy’s feelings and thoughts, about Jimmy as an individual prompt him to decide what’s best for Jimmy in a way that emphasize Jimmy’s vulnerabilities, bringing about inadvertent consequences—including his brother’s abduction–that change Jimmy and his family in ways that cannot be undone.

Similarly, Sandra, the older woman of May-September, realizes how narrow she has allowed her world to become after meeting Alice. Neither Alice nor Sandra can explain their sexual attraction, but in the short time that they have to develop their relationship, Sandra emerges, bit by bit, from the shell in which she has spent years encasing herself and Alice begins to feel less lonely and more purposeful after a bad breakup.

Just as Sandra is on the brink of re-discovering herself, she suffers a health setback that enables her daughter Andrea to rob her of the one thing that vulnerable people lack the most: choice. Under the guise of looking after Sandra’s best interests, Andrea treats her not like a child but an object, deciding her future and fate without discussing it with her, effectively imprisoning her behind the bars of the vulnerability that aging brings.

Sandra, on the brink of becoming a butterfly, sees her chrysalis turned into a thing from which no butterfly can ever emerge. And a piece of Alice, who lovingly nurtured Sandra’s transformation and was affected by her forced future, dies with Sandra’s dreams. Here Sandra comes to terms with the future that she neither wanted nor envisioned:

Although the vulnerable characters in both stories suffer for their susceptibility to the careless hands of others, fate and time, the book offers hope. If Jimmy fails to understand the extent of the hurt that he inflicted on the girl, he also fails to grasp the hurt that was inflicted on him. If Sandra’s future becomes the one that her daughter envisions, she still retains the one thing that cannot be stolen: her music. And Alice, who hibernates after the abrupt end to the budding love with Sandra, emerges into the light of her own spring.

Michalski’s double novellas, written in a deceptively simple but lyrical style, are aptly paired in a book that deserves to be added to anyone’s must-read list.

In addition to Could You Be With Her Now, Jen Michalski is the author of the novel The Tide King, a winner of the The Big Moose Prize, and the short story collections From Here and Close Encounters as well as the editor of the anthology City Sages: Baltimore. She is also the founding editor of the literary quarterly jmww, co-host of the 510 Readings and the Lit Show and an interviewer at The Nervous Breakdown.