One Hundred Thousand. A number so large I can’t even picture having that much of any one thing. When LPR poetry editor Laura Shovan first uttered that phrase to me, I misheard her and instead pictured 10,000 Maniacs, one of my favorite bands. Strains of “Verdi Cries” came to mind. “Are they coming in concert?” 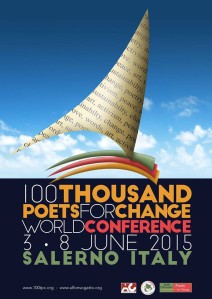 Ever tactful, Laura repeated herself. “One Hundred Thousand Poets for Change.” She’d been invited to participate in a conference. In Italy. Other details were shared, most of which I didn’t hear. Italy. Images of statues, fountains, fresh pasta and red wine filled my consciousness.

Joking around as I always do when someone mentions a trip, I said, “Let me know if I can carry your bags.” The joke was on me when a few days later, Laura texted me that the conference materials included triple room rates. “Want to come?”

It took all of a nano-second for me to reply that I would love to. Details worked in my favor, thankful as I am for frequent flier miles and a supportive family, and that’s how I attended the first One Hundred Thousand Poets for Change World Conference in Salerno, Italy with Laura and contributing editor, Ann Bracken in June.

Laura sent along another surprise. “You’ve been invited to read, too.”

“But I’m not a poet,” I said, feeling like a wolf in sheep’s clothing. (I secretly wanted to read, knowing that chances to do so come all too infrequently when one is unpublished and relatively unknown.)

Poets are kind and generous people. Michael Rothenberg, one of the two co-founders of the 100TPC, sent me a note, saying I could read anything I wanted. “It can’t be longer than two pages or five minutes in length.”

The next months were spent agonizing over what to read, how to pack and speed-learning Italian. Our trio met and divvied up responsibilities. Laura booked tours. Ann took care of lodging. I handled transportation. 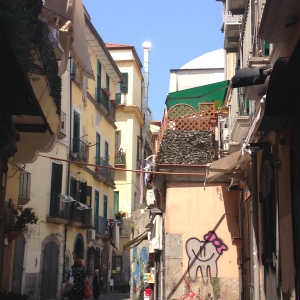 We arrived in Salerno via a train from Rome. It’s a historic seaside town south of Naples. Our B&B and the Santa Sofia complex, where the conference was being held, were both in the historic part of Salerno. Picture crowded together tall buildings in ochre, cream and buttercup, with shutters thrown open wide to catch the sunlight. Clothes lines hung from every home, bright and cheery. Narrow warrens of streets, more alley than avenue, wore cobbles like uneven teeth.

We stayed in Salerno Antica, where our host Daniele Abbondanza treated us like royalty. A sumptuous Italian breakfast, complete with thick dark espresso, greeted us each morning. One morning, Daniele served grilled vegetables fresh from the market. Never have zucchini and eggplant tasted so delicious! Another morning, we devoured a spinach pie. And always there were fruits, cheese, salami and homemade sweets. 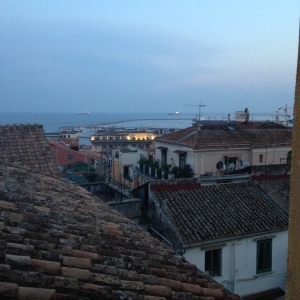 As delightful as our B&B was, nothing could have prepared us for the emotional experience of 100TPC. Our first night we gathered together on the roof deck of Santa Sofia for a meet-and-greet party. In some cases, people who’d been talking together virtually for as long as five years were meeting face-to-face for the first time. In others, folks were introduced that night. As the sun set over the Tyrrhenian Sea, turning the sky from baby blue to orange to pink and, finally, to purple, we hugged, laughed and cried. Age, race, nationality, sex — none of it mattered. We shared a love for language, a passion for improving humankind’s lot on earth, and a deep-seated desire to make a difference. 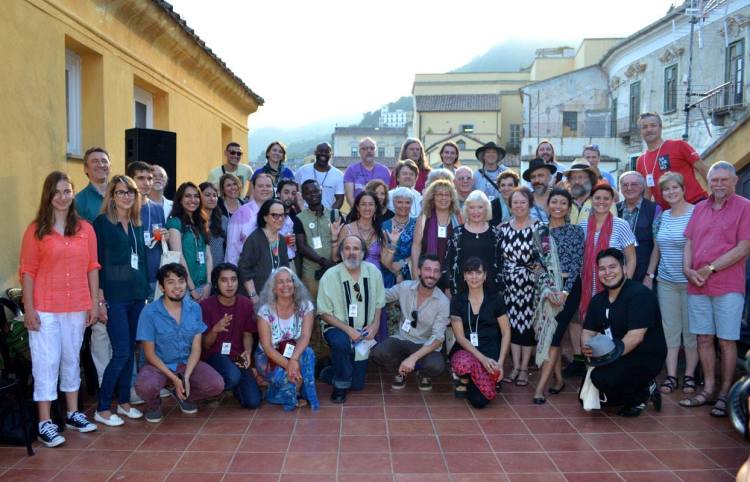 The conference lasted for four full days and included break-out sessions, readings, music and tours. Poets from over 30 countries attended: India, Malaysia, Romania, Hungary, Mexico, Canada, Italy, Germany, Ireland, Australia, France and Ghana to name a few. Even when people struggled to communicate because of a language barrier, they somehow found a way to connect. The conference had a talented translator name Giulia Sensale, who spoke a multitude of languages and worked hard to keep everyone caught up. I was even more impressed to learn she was only 18 years old! 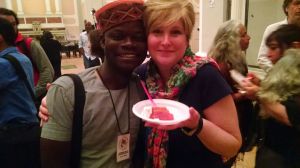 I hesitate to call out by name some of my new friends, because there are so many. But I’d like to share a few people who touched me deeply. I hope you’ll get to meet some of these and more right here on the Little Patuxent Review’s blog.

Richard Botchway of Ghana became one of the conferences most beloved attendees with his ever-present smile and warmth. Orphaned at seven, he has survived the worst experiences to thrive, give back and encourage others to rise above their circumstances. His visa troubles in Germany on his return home had us all in tears, knowing the purity of his soul. Sadly, he is not the only person who experienced visa issues. It made me realize how much I take for granted the ease with which I can travel.

Elaine Foster of Malaysia opened our eyes to the challenges teachers face in that part of the world to simply teach language and poetry. She’s articulate, funny, and passionate. There’s a fierce fire burning in her. When she recited her re-imagined story of Medusa, we sat entranced, spellbound.

Gabor Gyukics, Budapest, Hungary, wore his gray hair long. It’s probably what most people would first notice about him. His kindness, thoughtfulness and intelligence were outweighed, maybe, only by his gentlemanly behavior. Author of many books, several in translation, Gabor was someone with whom I would have loved to have spent more time talking. Budapest has long been on my top places in the world to visit and I know when I get there, Gabor will welcome me, and I will be delighted to see him again. We’ll dive right in, discussing books and world issues, and it will be as though we’ve never been apart.

David Loret de Mola of Sacramento is a slam poet, who struggles with depression. Observing him work and hearing him speak, I learned how one can turn an obstacle into an opportunity. He’s beautiful to listen to and brave for sharing so openly his experience. His voice is an important one.

Lisa Vihos from Sheboygan, Wisconsin was one of those women with whom Laura had been corresponding for years. Seeing them connect was like seeing a college reunion. Lisa’s enthusiasm felt contagious and her poetry transported me. Hearing her cross-roads story felt familiar. You’ll want to read more of her work, follow her story and see where this incredible woman takes us.

Supriya Kaur Dhaliwal, a young Indian poetess still attending university at St. Bedes College, who has also published a chapbook called, Musings of Miss Yellow, to great acclaim. Her quiet demeanor belies a strong, smart woman. Keep an eye on Amazon for her book to become available more readily in the U.S.

Robert Priest from Toronto recited a poem from his book Rosa Rose. It is one every person ought to read (actually, they need to read his book). It was about Mohammad Ali. I loved how he shadow-boxed as he told the story of Ali choosing not to fight in Vietnam.

Siobhan Mac Mahon (do I even need to tell you her place of origin?) read riotous feminist poems, encouraging us to recite the refrains along with her. The last night we were together, she clambered up on a chair to share her poem about Lilith, Adam’s first wife. I think most of the photos I have of Siobhan show her with a fist held high in the air, hair swirling wildly about her head like a Celtic warrior maiden. She’s fierce and determined just like that.

Michael Dickel, late of Minnesota but now of Israel, read his work beat poet style to guitar music, unrehearsed and rather unplanned. He grooved along, digging each moment and we couldn’t help but enjoy watching and listening to him. He continues to be encouraging, even from afar. You can see some of his poetry on Author Amok.

Not all readings were performed in English. Perhaps the most lovely of all were those read in the poet’s native language, like Spanish or Italian. I listened to the rhythm and cadence, the pauses and could hear the yearning. The messages resonated deep within me. Isn’t that how poetry should be?

Things weren’t all rosy in Salerno. For example, in the public restrooms, there were no toilet seats. Karen Alkalay-Gut from Israel immortalized this shocking fact in — what else! — a poem. The young poets, which consisted of a cross-cultural group, made “demands” which must be met by the next conference, among them inclusion of a wine fountain (no disagreements here).

While the large group settings were enjoyable, what I found most suitable for my personality was the smaller gatherings. The “let’s grab lunch or a drink” where we could talk and delve more deeply into who the other was, and hear her story. That’s when the real connections took place. We discussed heavy topics like the responsibility we share to select our words for greatest impact, to not shy away from challenging the status quo, and for banding together to bring about lasting change. And, we ate copious amounts of delicious pasta and drank fair amounts of delightful vino. “When in Rome….” 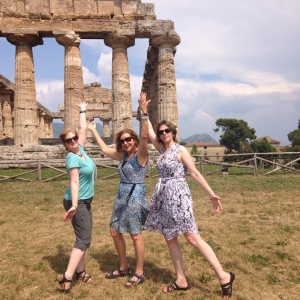 Ann, Laura and I played hooky from the conference one day, traveling to the historic site of Paestum with Waqas Khwaja, an English professor from Agnes Scott College in Georgia, who came late to the conference because he’d been traveling with a group of students to historical sights of literary significance throughout Great Britain. Our conversations with him were rich and much too brief.

And our time in Salerno with our  new poetry friends felt all too short. Now it feels as though it were a dream. And my reading? It went pretty well. I read a short essay about autism called, “Seeing Anew.” I felt loved and supported, but most of all grateful.

Online Editor’s Note: September 26, 2015 has been designated 100 Thousand Poets For Change Day around the globe. If you’d like to organize a local event, you can! Simply register your event and you’ll get information and support from around the world to make it happen. Last, but not least, I’d like to give a shout out to Michael Rothenberg, Terri Carrion, Filippo Trotta, Valeriano Forte and Pino Green for all their hard work before, during and after the first 100TPCWC to make it happen so beautifully.

3 thoughts on “One Hundred Thousand.”