On January 28, Little Patuxent Review will launch the Social Justice issue, guest-edited by poet Truth Thomas, at Oliver’s Carriage House in Columbia, MD. In celebration of the release, I was invited to share my thoughts on the upcoming issue and social justice. 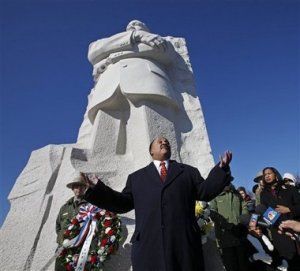 I wrote this on January 16, Martin Luther King, Jr. Day. King would have been 83 had he not died at the hand of an assassin on April 4, 1968. I remember this as if it were yesterday. I was 12 years old when he was killed, and I saw my home city of Washington, DC go up in flames. When I previewed the Social Justice issue, I felt something awaken in me that was distinctly different from what I had ever felt when reading any of the other issues. I was brought to tears and filled with a kind of acute empathy that comes from reading and seeing the extension of a collective history and presence that is closely aligned with my own experience.

My childhood in the Sixties, like that of many of my generation born in any major city in America, was overshadowed by the daily struggles for social justice that sent many into the streets, hospitals and jails. In Southeast Asia, young soldiers and innocent people alike were dying in horrible ways from bullets, bombs and Agent Orange. Soldiers–family members–were returning home, many damaged both mentally and physically. Some of them became homeless, others drug addicts and still others committed suicide.

I also remember watching the August 18, 1963 March on Washington for Jobs and Freedom on my grandmother’s black-and-white television set and looking for my parents in that seemingly endless, indecipherable crowd. The energy was palatable even though I was separated from the crowd by miles and that TV screen. 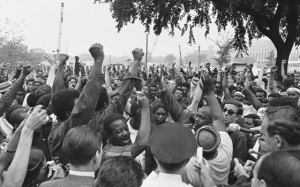 Ralph Abernathy (center facing, short sleeves), leader of the Poor People’s Campaign, near the grounds of the US Capitol Building on June 24, 1968. (Photo: AP)

After King was assassinated, my folks took my sister and me to Resurrection City, the encampment on the Mall for the Poor People’s Campaign. This was the last major project King envisioned before he died. It took the fight for social justice in America beyond sit-ins to a well-orchestrated, well-thought-out “live-in” for thousands of people of all colors, some with families and children, seeking to bring notice to the plight of the poor. Resurrection City, documented by photographers, was designed by DC architect John Wiebenson and his students at the University of Maryland to function as a self-sufficient community. The press called it disorganized and dirty. For those who had trekked for miles to get to the Mall and dealt with the rain and mud, it was the last hope.

Today, information on issues affecting the health and well-being of individuals and nations is easily accessible through millions more pathways than in those revolutionary times, when so much acceptable toxic behavior was unleashed behind the locked doors of homes, institutions, corporations and governments and disguised as normalcy. Movements coalesced despite the absence of Facebook and Twitter, though. Stories were–and still are–twisted to suit the teller, but there were no eyewitness video hounds to disprove them on TV or in newsprint.

Unlike many children today, I heard and listened to the news. I heard about the riots in Chicago, Berkley and LA. The protests, the horror of the fire-hosings, the tear-gassing, the beatings of college students, women, anyone in the way of a police baton. I remember the sight of unarmed, defenseless people with blood running down their faces.

I knew who the Black Panthers were: a progressive, demonized group dedicated to social justice and change. I knew who Angela Davis, Adam Clayton Powell, Jr., H. Rap Brown, Stokely Carmichael, Huey P. Newton and many of the other game-changers in the constant fight for social justice were and met both Davis and Newton when I became an adult. I knew about SNCC, SDS and what those students risked to change the world.

I often wonder whether other children of my generation growing up in urban environments felt the same kind of constant, deep-seated tension that I did–a tension that eventually became my normal for many years–or whether that tension was peculiar to me because I was a budding poet, acutely aware of the chaos in the world around me.

Now, my generation and our elders are witnessing a world where our memory of place has been bulldozed, redesigned, re-purposed, and where, in some locales, the schisms of the past are no longer recognizable. While we have evolved ever so brilliantly with our 21st Century appendages that connect us at the speed of light to every corner of Earth, we cannot ignore the fact that many dwell in the most base level of humanity. Our top-rated entertainment is rooted in cruelty, torture, manipulation, debasement, greed and indifference. These are realities to many, who do not find them entertaining in the least. 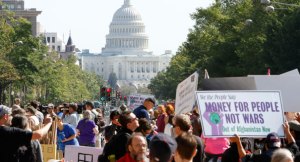 Occupy DC protesters in 2011 with the US Capitol Building in the background (Photo: AP)

Storyteller and mythologist Michael Meade talks about people having to be in the “right kind of trouble in order to change their lives.” In this first decade of the new millennium, we have “the right kind of trouble” all over the planet. The range is vast and crosses political, socio-economic, racial and religious boundaries. The tensions mirror those of the Sixties, and the gift–now as then–is that we poets, writers and artists can dive into this trouble eschewing shame to bear witness to the sorrow, rage and futility of perpetuating cultural evolution based on injustice. We are the witnesses for those whose ability to argue has been silenced and the advocates for what is intellectually promising, what is spiritually and physically sane.

The gift of this witnessing as reflected in the LPR Poets for Social Change panel discussion at the 2011 Baltimore Book Festival, the LPR blog series “On Being Invisible” and the pages of the upcoming issue of Little Patuxent Review speaks to the remarkable and horrendous aspects of humanity and covers a vast territory. There is the sexual, mental and physical exploitation of women and children, immigrant and migrant people and the irreparable consequences of war. There is the mis-education and disproportionate imprisonment of males of African descent and the resulting growth of the prison-industrial complex in America. There is the damage caused by corporate irresponsibility and greed and the man-made environmental catastrophes. There is the homelessness, invisibility, poverty, famine and, as Howard Nemerov says in his poem “Magnitudes,” “disasters drastically different from those we have to know about.”

If you are a thinking and feeling person, I hope you won’t put down the Social Justice issue without being filled, stirred, angered, saddened and perhaps moved to create some action–however small–of your own to teach, reach and empower those you touch to advocate for a more equitable social and cultural evolution for future generations.

We look forward to seeing you on January 28th  and welcome your comments once you have read the Winter 2012 Little Patuxent Review Social Justice issue.