This essay is part of a series inspired by our Winter 2012 Social Justice issue. The first one was posted September 2011, and all feature people who have helped make marginalized segments of our world more visible to mainstream America through poetry, prose and visual art.

Not long ago, I learned that Russia has the third highest incarceration rate in the world (542 prisoners per 100,000 population). Given my background, I can’t say that I was surprised. (I was born in Latvia around the time that Soviet soldiers were piling my compatriots, including my mother’s brother, into cattle cars and transporting them to gulags in remote regions of the USSR.) Nor did I find it particularly remarkable that Rwanda, site of the 1994 Genocide, comes in as second highest (595/100,000).

What did come as a shock was discovering that my adopted country–the United States of America, where I sought refuge at age five from war and oppression–ranks Number One (a whopping 743/100,000). In fact, while my fellow Americans represent only about five percent of the world’s population, about one-quarter of the entire world’s inmates are housed in US prisons. What was even more disturbing was that it seemed as though many of those inmates never had the same shot at the American Dream that my family and I did, even though we had arrived at Ellis Island bereft of all our material possessions.

Over 60 percent of the adults that the United States has seen fit to imprison read at or below the fourth-grade level; in other words, they are functionally illiterate. More than half have a history of drug abuse or addiction. And a disproportionate number are non-Hispanic blacks (39.4 percent of the 2009 prison population compared with 12.6 of the general population, according to 2010 US Census Bureau statistics). Many neither had the means to make it in American nor the wherewithal to voice the injustice of it all.

Apart from the occasional, well-publicized prison riot, most remain invisible in a place that Nobel Prize-winning poet Joseph Brodsky has characterized as being “essentially a shortage of space made up for by a surplus of time.” A fortunate few in Jessup, MD, however, have gained notice due to the efforts of Baltimore poet, former head of the Towson University English Department, publisher of BrickHouse Books and Little Patuxent Review contributor Clarinda Harriss. Here’s Clarinda, in her own words: 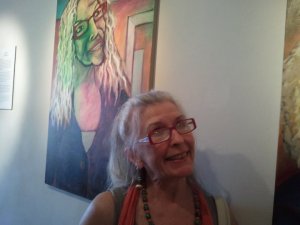 Clarinda Harriss, seen twice at the Minás Gallery in Hampden, once through the artistry of Minás Konsolas.

The most visible I ever felt was when I first walked up a flight of iron stairs inside the Maryland House of Correction in the early 80s as a guest of the newly formed MHC Writers Club. I was a woman. I was nobody’s girlfriend. And I was white. The residents–you do not say “inmates”–were all male, and about 95 percent were black. Many were gray-haired, gray-bearded. Residents of MHC, better known as “The Cut,” stayed there a long, long time, usually for life.

My initial job–actually, I was never more than a volunteer–was merely to provide a female voice for Ntozake Shange’s For Colored Girls who have Considered Suicide When the Rainbow is Enuf, read out loud in tandem with the Writers Club president. He wanted to convince the other members to work with him on a male answer to Shange’s choreopoem. The resulting For Colored Guys who Have gone Beyond Suicide + Found No rainbow became the best selling book that my venerable small press, BrickHouse Books, ever published and is about to go into a fifth edition. It has been performed on TV and stage and started me on decades of monthly visits to the Writers Club.

The Club owed its beginnings to a feminist scholar, Margaret M. Blanchard, who taught writing courses at The Cut, and owed its many years of flourishing to a visionary activities coordinator, Hannah Coates. Hannah said “yes” to things that other administrators said and are still saying “no” to. This is one reason why Margaret and I worked at the men’s instead of the women’s prison, where residents–then as now–were permitted far less visibility than their male counterparts.

The men at The Cut had figured out and were allowed to pursue a variety of ways to be visible: writing for the prison newspaper, The Conqueror, a mimeographed monthly that always struck me as remarkably uncensored; sporting interesting and highly decorative hairdos; fashioning beautiful hats from scraps of brocade and velvet gleaned from the prison’s upholstery shop.

At The Cut, I could communicate with Club members (and eventually other MHC writers as well) without having to include their DOC numbers on the envelopes. The administrators and guards knew them by name. Guards sometimes even sought Club members’ assistance in writing letters and papers. I witnessed more than one instance where a resident played Cyrano to a guard’s Christian. But, of course, those love letters went out under Christian’s name, not Cyrano’s. And many who died in The Cut ended up in anonymous graves.

Amazingly, the handful of Writers Club members who created For Colored Guys… not only did not die “inside” but also (except for one, who got devoured by the street) defied prison statistics on recidivism to become solid, productive citizens “outside.” True, some deliberately maintain an aspect of invisibility, asking me not to emphasize their prison past when writing about them. That’s why their names don’t appear here.

But every one of them has his name on the cover of that book.

Clarinda’s fostering of American prison literature followed in the footsteps of authors like H.L. Mencken, who founded The American Mercury in 1924 and regularly published pieces by convicts, and Norman Mailer, who helped publish letters he had received from convicted murderer Jack Abbott as the 1981 bestseller In the Belly of the Beast: Letters from Prison. Public support for such efforts, however, has waxed and waned.

The Great Depression brought suppression, with prison manuscripts perceived as profitable subversive tools. The social and political unrest of the Sixties and Seventies engendered a renaissance of sorts. Prison writing made its way into paperbacks, periodicals and even major motion pictures. Then, the trend reversed again. New York State passed the “Son of Sam law” in 1977, making it illegal for convict authors to profit from their writing. And later in 1981, Abbott killed a man during a fight only six months after his release on parole, which Mailer had championed.

These days, one of the few remaining sources of support is the PEN Prison Writing Program, which published the 2000 anthology This Prison Where I Live: The PEN Anthology of Imprisoned Writers that includes the Brodsky quotation cited above.

Still, those incarcerated in the US prison system have managed to produce an impressive body of literature over the years. Notable books include:

2 thoughts on “On Being Invisible: Our Nation’s Incarcerated”