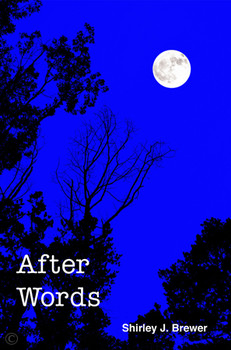 Most of us don’t live in hamlets. Even if we did, I suspect we’d still get our news mostly from the Net, from neighbors and co-workers and friends, TV, the diminished but dogged daily papers, the weeklies. Surely not from books. Rarely do we experience our news directly. It’s hand-me-down, a leeching of vitamins from vitamin pills, not whole foods.

Yet After Words somehow defies all this to deliver its news needle-to-vein, turning the reader into a direct witness. It burns in the palm and reads like a teletype. It is a knife thrust. Dispatch after dispatch, Shirley Brewer leaves us no easy way to turn our eyes. So yes, the book is reportorial. Yet it is more: part cenotaph, part elegy to this clearly bright, sweet fellow, this real-life Everyman, someone a lot like you and me. Part of the teeming masses. A citizen. A researcher at Johns Hopkins. A budding medical student.

But two days shy of his twenty-fourth birthday, this Everyman was stripped forcibly of his anonymity and burst unavoidably into the headlines when he bled out on a city pavement, heart punctured by a mugger’s knife. A private life, a public death.

And so this Everyman got a name. Stephen Pitcairn.

Pitcairn’s slaying occurred one block from the author’s home in the Baltimore hamlet known as Charles Village. She never knew him, as most of us remain unknown to each other until fortune, good, bad or notorious, draws attention to us; never knew him, yet in the pages of After Words constructs an incisive and meticulous portrait, perhaps of the victims (yes, plural: “When you kill a son, you kill his mother too,” the poet reminds us), perhaps of our common, most atavistic selves. This isn’t a poetry to turn to for pleasantries.

Disclosure: Like Shirley Brewer, who stitched together the discarnate bulletins that make up After Words, I never knew Stephen Pitcairn; but Shirley I know. She is a deft and professional writer, an acrobat who inches across the high wires of her art with grace and roisterous good humor. If you, too, are acquainted with Brewer’s work – and the public audience is certainly growing for her spirited, haunting, sometimes insistent, always capacious, Thoroughly Modern Shirley voice – then this slender volume may surprise you: the voice is pretty spare here. Appropriately spare. While the grace informs every page, the wry humor has been flensed, scooped clean, replaced with the unhurried, fully permeable nobility of a mourning sensibility. Much in the way of lamentation comes from the victim himself, shade of a shade.

Is it too much to ask
for one piece of chocolate cake?

I grieve for my parents, my sisters,
my co-workers, my friends –
the light they lost when I died.

My mother heard my final cries
over the phone – Mom,
the last word I spoke.

Since she never knew him, Brewer pulls off this act of fine imagination with her back against the wall, especially in the creation of particulars: returning to us someone she never met, delivering him in high, unforgettable contrast. And so reading the poems is something like assessing at close range the gradations of Moonrise, Hernandez, New Mexico, a large print of that icon, perfectly developed, which is a sort of magic on the wall. After Words is a sort of magic in the hand: sitting by Adams’s lens, by Brewer’s pen, we rise to become bystanders in the half light preceding the dark.

Brewer, for all the gypsy scarves and fires gladdening her other work, is no necromancer: she knows damned well that she can’t raise the dead, that the dead don’t shine, don’t feel, don’t speak, and ditto inanimate objects, yet she wags her pen and forcefully conjures these selfsame riddles and runes. Stephen rises (so to speak, and speak he does) and shines (“brighter than a full Charles Village moon”). The moon speaks. Even the ruinous knife speaks. The pages of After Words record Brewer’s struggle for reconciliation and meaning, even if only existential, no alchemy, no thaumaturgy, no voodoo to it, the mode elegiac, the voices disconsolate.

In “The Role of Elegy,” Mary Jo Bang addresses the point:

What is elegy but the attempt
To rebreathe life
Into what the gone one once was
Before he grew to enormity.

Come on stage and be yourself,
The elegist says to the dead. Show them
Now – after the fact –
What you were meant to be:

The performer of a live song.
A shoe. Now bow.
What is left but this:
The compulsion to tell.

This poet tells. She invites Stephen to come onstage again and again, invites him to be himself the while, and what emerges is not so much memoir as a grounded and very sentient but unsentimental study.

I live on in blue,
a doctor of sky.

Yet she is not unremitting. When she asks us, in Stephen’s voice

If I could look in a mirror
right now, what would I see?
No one says: Death
becomes you.

she allows him a rare droll moment. But then he continues, absent a whiff of irony

The dead cannot speak –
both lungs and larynx lost.

If another language thrives here,
I have not learned it.

My words still shine like candles
tossed into the white cauldron of moon.

and we are back on track, in the demimonde of the associative. The heart’s blood of poetry. This track leads us to a (technically, emotionally) admirable passage, Stephen’s too-human realization that

This lonely country could be an illusion,
except I remember my casket

lowered into the ground,
severing me

from my sisters drenched in black.

“. . . my sisters drenched in black” – did you notice? – there’s the economy of the artist asserting itself. But of course. Of course.

This is real poetry pressed into the service of nobility, not simple art. Deceptively hard to do, yet Brewer, as in everything she’s shared with us, is abundantly equal to the task. But perhaps she had help. Let Stephen’s words abide, then, for the poet, for us, for his family:

Did they think a knife
was enough to part us?

How do I relinquish
the parts of me that will not die?

Invisible, my hand rests
steady on your shoulder.

Shirley Brewer will be a featured reader at the Minás Gallery open mic this Sunday. Admission is $3. Click here for more details. For insight into Shirley’s approach to writing and craft, see her contribution to our Concerning Craft series.